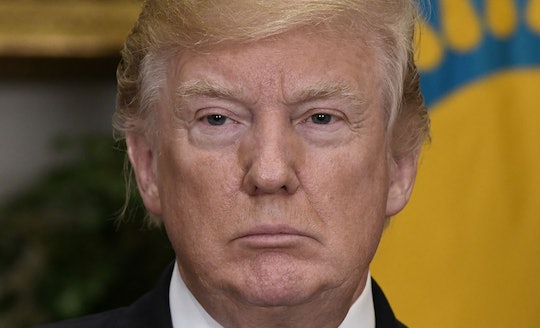 People Are Fat-Shaming Trump After His Physical Exam, & It Sends Kids A Terrible Message

In case you missed the news: Earlier this week, President Donald Trump's physician released the results of Trump's annual physical exam. Dr. Ronny Jackson told reporters on Tuesday that the president stands at 6'3" and weighs 239 pounds, and has problems with cholesterol, according to NBC News. Why Trump felt the need to have this information released is beyond me, but it's out in the world. And not long after, the jokes about his height and weight started pouring in. But here's why you shouldn't fat shame Trump, despite his own fat-shaming history: It's reductive.

I feel the need to include a disclaimer before I continue: I don't like Trump, as a president or as the person he projects to the world. And no, by admonishing fat-shaming, I am not defending Trump's actions in and out of office. Simply, I have one point: Fat-shaming isn't OK, no matter who's at the receiving end of the joke.

And it's not about Trump's feelings. I couldn't care less about his feelings. But fat-shaming Trump teaches the children around you that it's OK to bully people for their weight and looks. If you don't want them to fat shame you, others, or themselves, then you can't fat shame the president — in their presence or not.

Take, for example, when you compare Trump's body composition to an athlete's body, which people started doing immediately after his stats were released, according to The Washington Post. You may think it's reasonable to do so because it exposes his "lies," but the truth is, it teaches kids that their bodies have to look a certain way at a certain size. Imagine your son or daughter internalizing that message; that, because they aren't slender or have muscles at this height or this weight, that their body is wrong — even though every body is different. What do you think that will do to them?

Comparing Trump's body to an athletic one also ignores physiology, completely. Muscle is more dense than fat. It doesn't mean muscle weighs more than fat (it doesn't); instead, a pound of muscle will be leaner than a pound of fat, according to Live Strong. So what does that mean? A professional football player will look thinner, leaner, and more in shape than Trump at the same size if they are made of lean muscle mass. That's how muscle and fat work. It's simple science.

And that is why claiming to want to "expose the truth," as Guardians of the Galaxy director James Gunn has recently, is ridiculous. Because it's just another form of ridicule.

Gunn had offered to give $100,000 to Trump's favorite charity if the president agreed to step on a scale in front of an independent physician, according to Entertainment Weekly. The director claimed on Twitter that he made his offer to catch Trump in a lie (known somewhat cheekily as the "girther movement"), and used Trump's own history of fat-shaming as a defense. But it's weak reasoning, to be honest. It's simply a humiliation tactic that no kid should be witness to, including Trump's own 11-year-old son. Plus, Trump has lied about so many other things during his presidency so far that his weight should be the least of anyone's problems. (Russia? Saving jobs? Making America great again? Any of that ring a bell?)

I understand the knee-jerk reaction to mock Trump's weight and health. I understand why it is so easy to do so. After all, my toddler son has more couth than the country's 45th president. But that doesn't mean you should fat shame him, even if it is understandable why you may be concerned over a president's health. Trump has done enough political and social damage in the first year of his presidency that you would be remiss to mock his body.

You're better than that, even if the president isn't.