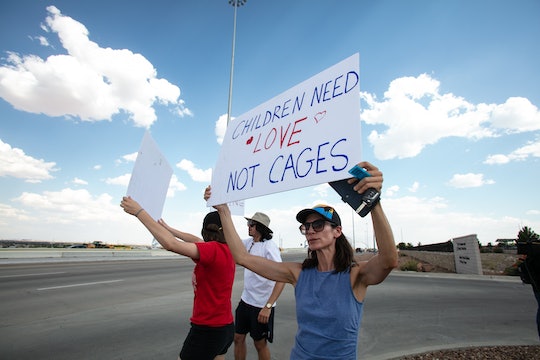 It can be difficult to stay focused on one horrible thing that's happening when it feels like there are just so many horrible things happening all the time. When your news feed is constantly reminding you that the world can be a dark and terrible place and you feel like there's just nothing you can do to make it better. But then something happens. A moment where people come together to remind us that we can make a difference. Like people who stood outside detention centers to remind immigrant kids they're loved, and that no one is going to just forget about them any time soon. Let's clog our news feed with stories like these, shall we?

Democratic presidential hopeful Elizabeth Warren joined protesters outside the for-profit Homestead Detention Center for unaccompanied migrant children in Homestead, Florida on Wednesday, just hours before the first Democratic primary debates in Miami that evening. As Common Dreams reported, Warren was asked to join the protest at an earlier Town Hall meeting and promised not just to be there herself, but to bring along supporters and, perhaps just as importantly, media coverage of the protest.

So what is life like at Homestead for migrant kids? In Sen. Warren's own words, "No laughing, no playing. These are children who are prisoners."

The senator from Massachusetts was joined by dozens of supporters as she stood outside the detention center, where a high fence kept the migrant children from view. Warren told reporters that she had asked to be allowed inside to meet the children, but that request was allegedly denied.

Warren — a former elementary school teacher herself — then stood on a ladder to see inside the center, waving at the children passing by. According to HuffPost, she described the conditions to the crowd, saying that the children weren't playing or laughing "the way children usually do when they’re moving from one place to another."

"These were children who were being marched like little soldiers ― like little prisoners ― from one place to another," she told reporters, according to HuffPost. "This is not what we should be doing as a country."

Miami Herald reporter Monique O. Madan also described the conditions inside Homestead, which is not subject to state inspections because it is on federal land, to CBS News. "What we have learned over the course of a month or two, detailed in court records over the last month, is that conditions inside — kid's are cutting themselves," she told CBS News. "They can't hug each other, they're crying themselves to sleep, they feel alone, they don't have the resources, they have two calls a week to their parents, if they answer the phone."

With these grim reports in mind and all of the disturbing news surrounding the treatment of immigrant children that's surfaced recently, people gathered outside the detention center and shouted positive, hopeful messages to the kids, according to CBS Miami.

People were heard shouting, "Homes instead," "Stop separating families," and "Shut it down! Shut it down!"

People outside the detention centers were also heard yelling, "Los queremos" (we love you) and "Estamos con ustedes" (we are with you), according to HuffPost.

Elizabeth Warren's presence at Homestead has apparently galvanized some other Democratic presidential hopefuls to visit the detention center themselves. According to the Washington Post, Sen. Kamala Harris said she planned to visit, as well as former Rep. Beta O'Rourke and Sen. Bernie Sanders.

These children need to know they're not going to be forgotten by the 24-hour news feed. They need to know people want better for them.