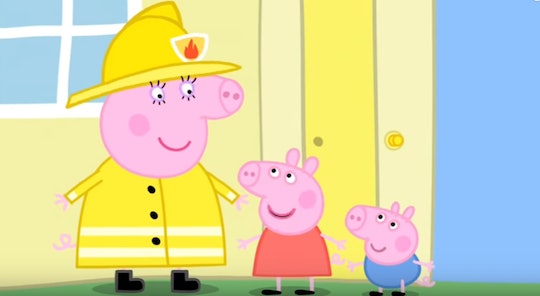 An episode of the popular children's cartoon, Peppa Pig, has stirred up controversy once again. This week, Peppa Pig is facing backlash from the London Fire Brigade and more on social media for using an "out of date" word promoting gender stereotypes, as CNN reported. Specifically, for using the word "fireman" instead of the gender neutral option.

In case you missed it, there's an episode of Peppa Pig called "The Fire Engine," during which Peppa's mom dresses up as a firefighter and takes the kids out for a little fire engine fun. Seems harmless enough, right? Not so much. In the episode, Peppa used the word "fireman" instead of "firefighter," which does sound a little old-fashioned.

In response, on March 17, the London Fire Brigade made it clear they were not impressed with Peppa's terminology and called the show out on Twitter, citing the Peppa Pig's "huge influence" over young children and pointing out that the phrase "firemen" hadn't been used in more than 30 years.

"Come on @peppapig, we’ve not been firemen for 30 years. You have a huge influence on kids & using out of date stereotypical gender specific wording prevents young girls from becoming firefighters," the London Fire Brigade wrote in a tweet. "Join our #Firefightingsexism campaign."

Entertainment One, the network behind Peppa Pig, has not yet commented on the criticism and Romper's request for comment was not immediately returned.

While this could be seen as a seemingly harmless faux pas that might not feel like a big deal in the moment, it is part of a larger picture. The word choice could be viewed by some as a term used to negate the idea that women are firefighters as well, which isn't ideal when you think of all the little girls watching the show.

Reactions to the London Fire Brigade calling out Peppa Pig, as well as another British cartoon called Fireman Sam, have been mixed.

Many people on Twitter appeared to agree when controversial commentator Piers Morgan took umbrage with the London Fire Brigade's concerns. As reported by The Mirror, Morgan tweeted in response: "If women are being 'put off' joining the fire service because Fireman Sam - A CARTOON CHARACTER - supposedly 'perpetuates male stereotypes' then can I politely suggest these women probably don't have what it takes to fight fires."

Although not everyone agrees on whether the word usage was a big deal and worth calling out, one Twitter user did note that the firefighters on Peppa Pig are actually women... so that's good to know.

The reality is, words matter. Especially when you're a little kid and so much of what you take in is sort of subliminal. I don't think it's a question of a little girl getting upset when she hears the word "fireman" necessarily. I think this is about the subconscious gender stereotyping that could potentially limit a young girl's potential choices.

And it's not as though there isn't proof that women are struggling to be seen in the world of firefighting. According to The Mirror, just 5.2 percent of firefighters in Great Britain are women, while in the United States that number drops even lower to 3.2 percent, as Government Technology reported. And as former firefighter Cheryl Horvath told the Chicago Tribune, "The numbers are abysmal. I don’t know that we’ve been able to gain the traction we need to get to that critical mass point."

It's easy to laugh off these little slips, but at the end of the day, though may not feel monumental to everyone, they do matter.

More Like This
Here’s How To Fight For Abortion Rights
Obamas Issue Powerful Statements After Supreme Court Ends Roe v. Wade
Keep Talking To Your Kids About Abortion — It's More Important Than Ever
Princess Charlotte Is Ready To Be A Soccer Star, Too