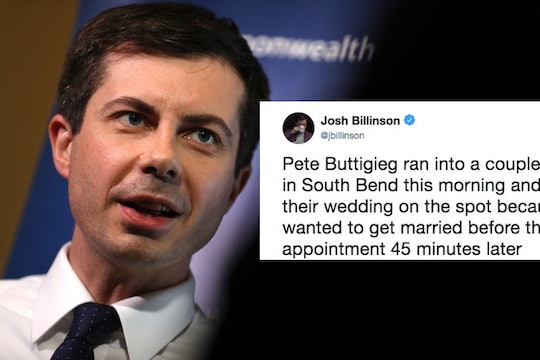 The Mayor of South Bend, Indiana, and presidential hopeful, Pete Buttigieg — aka "Mayor Pete" — is somewhat of a real-life superhero. The 2020 candidate is always there to help his constituents and he's a jack of all trades. As for his latest act of kindness? Pete Buttigieg officiated a wedding for parents-to-be en route to deliver their baby. The couple was on a time crunch, to put it mildly, but Buttigieg put everything aside to make the nuptials happen.

The always helpful, kind, and humble mayor character might seem like a trope invented for the television and film industry, but it's a reality in South Bend, a mid-sized city located two hours from Chicago, Illinois. Buttigieg — who took office in January 2012 at age 29 — is a boots-on-the-ground type of guy who goes above and beyond for South Bend's residents.

Back in March, for example, a story circulated on Twitter about how Buttigieg reportedly rushed over to a local hospital to help the family of an injured Somali boy. The staffers didn't have an Arabic translator, so Buttigieg — who speaks seven languages — supposedly stayed for "almost an hour" to help the young boy and his mother communicate with doctors.

Buttigieg put on his red cape once again when a pair of parents unexpectedly showed up at his office in the early morning hours of Monday, April 1.

"After going out into the hall to use the restroom, I ran into a young couple coming out of the elevator, saying I was just the person they were there to see," he recalled on Facebook. "In my mind I saw the rare few minutes of free time I had left vanishing, and without meaning to be discouraging, tried to hint that I did not have a lot of time for unplanned meetings. Reluctantly, I showed them in to the front part of our office and promised someone would try to take care of whatever their issue was."

South Bend's mayor had a change of heart, however, after he learned that the two were on their way to a C-section to deliver their daughter.

"That's when Mary and Gabe explained that she was on her way to the hospital for a 9:00 a.m. appointment for a c-section," he wrote. "And they were hoping they could be married before she delivered. (It must have been 8:15 or so.) She had the paperwork and everything in a folder along with her hospital papers, and they wanted to see if I could do the honors."

Given the pressing circumstances, Buttigieg was more than happy to do the honors. He added:

I corralled a few staff members as they were trickling into the office, to serve as witnesses, and filled out the paperwork. Their rings weren't ready, so one of my colleagues found a ribbon that would do the trick. A few minutes later, Gabe and Mary, newly married, left my office with just enough time to get to the hospital. And a few moments ago, they sent Mark in my office this photo of Gabe with young Jade Katherine Jones, South Bend's newest resident.

Sweet, right? If Buttigieg does become president one day, this story will become even more special. Welcome to the world, Jade!

After Buttigieg shared this heartwarming story, many fans took to the post's comments section to commend him for his actions. My personal favorite? "This man does everything," one person tweeted about Mayor Pete.

"Is Mayor Pete really the mayor of Pawnee, Indiana," someone else joked. "Because these stories would make great episodes of Parks and Rec."

Another commenter added: "We’ve been needing someone we can love."

It's true that Buttigieg does a lot. From his personal background (military vet, Harvard grad, etc.) to the work he does for South Bend, he puts his money where his mouth is. But most importantly, he inspires citizens to be better. And while everyone has a different idea of what an exemplary politician looks like, many people can probably agree that America's elected officials should set a high bar that others aspire to reach.

All in all, it's pretty cool that Buttigieg took time out of his busy day to marry Mary and Gabe before the arrival of baby Jade. A big congrats to their little family.