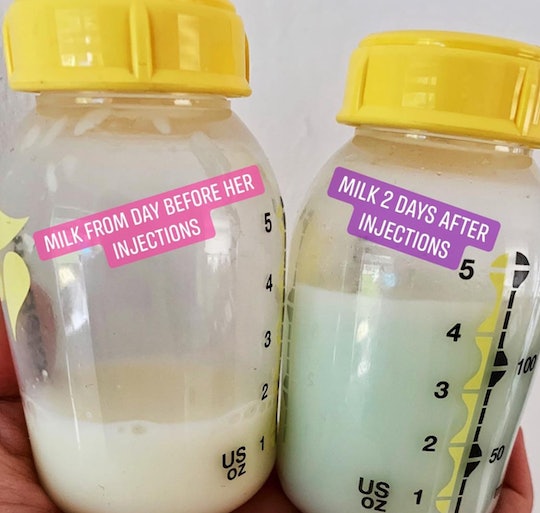 Breast milk has long been hailed as "liquid gold," and now that a mom's photo of breast milk after her baby got vaccinated recently went viral, a discussion about its amazing abilities has started yet again. In a side-by-side photo of her breast milk in baby bottles, one bottle's milk shows a blueish tint, but why is that? Is it related to her baby receiving vaccinations or is the cause due to something else? Experts have weighed in on the viral photo to provide a bit more context.

In the viral post on Facebook, Jody Danielle Fisher shared that her daughter had recently received her one-year shots. "Nancy had her 1 year injections on Tuesday afternoon, the 'normal' colour milk is from the day before she had them, the 'blue' colour milk is from today - 2 days after she had them," Fisher wrote on the Facebook post, which has received more than 12,000 reactions and nearly 10,000 comments since it was first shared on May 2.

Fisher said in her Facebook post that her milk turned a blueish tint "from all the antibodies my body is producing as it thinks she's sick with what she was vaccinated against!"

As the topic of vaccinations is a hot button issue lately, the post naturally sparked a strong response from the public, but there's likely a simple scientific explanation behind the fascinating "blue" breast milk that may have very little to do with a baby receiving vaccinations.

"Often milk from a fuller breast will have a bluer hue with a higher water content, versus a less full breast that might appear more white and have higher fat content," nurse and lactation consultant Angie Natero tells Romper of what she believes may have caused the color difference in the viral photo.

Natero also noted that breastfeeding moms' bodies do respond to the needs of their children, so there is some chance that the blue hue has at least a little something to do with the child's exposure to vaccinations.

"A [mom's] milk is generally designed perfect for her baby and is ever changing, day to day and feed to feed to best protect the baby as what she is exposed to via her environment and to best meet babies nutritional needs, so I have no doubt it might be possibly related too," Natero says. "Ultimately though blue or white appearance or somewhere in between a [mother's] milk is still amazing and so beneficial for her infant."

Nancy Hurst, director of Women's Support Services at Texas Children's Pavilion for Women in Houston, previously told Romper blue breast milk is not uncommon and is typically most visible within the first moments after milk is expressed from the body. She noted that as a breastfeeding mom continues to pump, the milk changes to a creamy color as its fat content increases.

"The blueish color is most noticeable during the first few minutes of milk expression, when the composition is mostly foremilk," Hurst explains. "As the breast continues to empty, the composition changes to hind milk, which is higher fat, giving it that creamier color."

Barbara Cohen, a longtime board-certified lactation consultant, also weighed in on the blue milk seen in the viral photo for Parents, and she explained that breast milk comes in different colors and consistencies.

"While there is still so much that we don't know about human milk, we do know that breast milk comes in a wide variety of colors and consistencies," Cohen explained to Parents. "The vast majority of those differences are normal."

After the post went viral, Fisher shared an update to provide more context as well. "My milk isn’t this colour from what I’ve eaten (not had anything artificially coloured/no supplements/no green vegetables), my milk is only ever this colour when my daughter has been sick...it’s never been like it when she’s be well," she wrote, adding that it "was expressed STRAIGHT after a feed so certainly not foremilk either."

With all this said, what's clear is that women's bodies are incredible. It appears that more research needs to be done to see if a child's vaccinations can alter the color breast milk in any way. Still, if anything, this photo is yet another amazing display of the powerful things a mother's body can do.

More Like This
6 Ways To Fix A Shallow Latch So Your Baby Can Nurse Properly
Here’s How A NICU Stay Can Affect Breastfeeding
Is It Safe to Take Ibuprofen While Breastfeeding?
This Reddit Post About Two Sisters In A Fight Over Breast Milk Is Complicated & So Sad