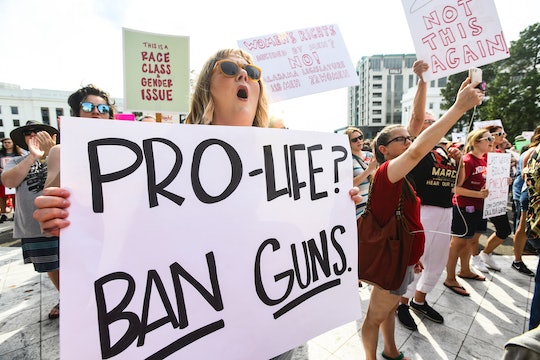 The pro-choice movement has been under attack for years, but the crusade against abortion rights reached new heights when, on May 15, Alabama Gov. Kay Ivey signed the most restrictive abortion bill in the country into law. And if you're feeling defeated, these photos from "Stop The Bans" protests happening across the country will leave you feeling motivated and ready to keep fighting for a person's right to choose.

To recap, Alabama's new legislation, the Alabama Human Life Protection Act, is a near-total abortion ban. Not only does the bill aim to potentially punish doctors who perform abortion with essentially life in prison, but it doesn't allow exceptions for rape or incest, according to CBS News. The only exception to the law is if a mother's life is in danger due to a medical condition, according to The Washington Post.

The Alabama Human Life Act follows other anti-choice bills, like Georgia and Ohio's so-called "Heartbeat Bills," that aim to ban abortion when the fetal heartbeat is detected. A fetal heartbeat, in case you didn't know already, can be detected as early as six weeks, according to Parents. Considering many people don't know if they're pregnant at six weeks, you could argue that these bills intend to ban abortion at this juncture.

In response to the recent wave of anti-choice legislation, "Stop the Bans" protests took place in almost all 50 states across America on Tuesday, May 21. The protests encourage people to "show up to speak out and fight back against this unconstitutional attempt to gut Roe and punish women," according to #StopTheBans' website.

Beginning at 12 p.m. local time, people across the country gathered at statehouses, town squares, and courthouses with signs slamming the recent anti-choice bills. While some slogans were short and sweet ("Not your body, not your business"), others dressed up in The Handmaid's Tale-inspired costumes to get their point across.

To many advocates' delight, tons of people showed up on Tuesday to support a person's right to choose.

A group of protestors in Pittsfield, Massachusetts, for instance, showed up with homemade signs reiterating that no person can dictate decisions regarding another person's body.

A big swarm of pro-choice advocates took to Georgia's state capitol to express their frustration, with many people holding signs that read, "Don't take away our care," which reiterates the point that abortion is health care.

The ACLU of Alabama showed a photo of people taking to the streets, captioning the scene with a very appropriate Taylor Swift reference: "Look what you made us do."

Someone who wasn't at the protests staged their own on a beach in Florida, writing in the sand: "Save Roe."

Of course, there were also handmaids.

Others wore t-shirts to remind lawmakers that abortion is a safe and legal procedure.

A group of Nebraskans got creative with their signs, with one person holding a "no rosaries in my ovaries" slogan.

Presidential hopeful Pete Buttigieg showed up to an event at the Supreme Court.

All in all, these photos act as a reminder that pro-choice advocates aren't giving up on this fight. Although it can be easy to feel defeated and tired at this moment in history, the #StopTheBans protests encourage people to keep going, despite the recent challenges.