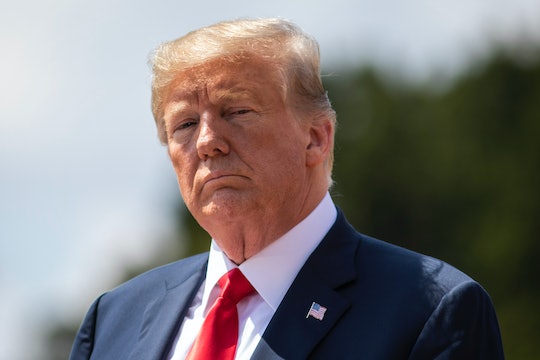 On Friday afternoon, President Donald Trump and First Lady Melania Trump met British monarch Queen Elizabeth II for tea. And the photos of Queen Elizabeth and Donald Trump meeting for tea show a first for the President of the United States. The event is Trump's first official visit to the United Kingdom since assuming office, according to Fortune. So, it's pretty historically significant.

Although the meeting between Trump and Queen Elizabeth will likely be very civil and official, the President does not face the same warm welcome from the people of the U.K. There are planned protests scheduled across London and in other areas while he's overseas, and Trump's meetings with officials there have all been arranged away from the capital in an attempt to avoid any negative meetings with the public, Harper's Bazaar reported.

But in spite of how the people of the U.K. may feel about the U.S. president, it's still very significant that he and the Queen are meeting during the visit, and photos from the occasion will serve as a way to remember the historic event. The Queen has met 10 of the eleven presidents of the U.S. who have held office since her coronation, and Trump is the latest in that long, impressive line, according to TIME.

To welcome Trump and the first lady to Windsor Castle, the plan was for a guard of honor to give a royal salute and for the U.S. national anthem to be played, according to CNN.

The Queen smiled as she greeted the president and his wife, according to the BBC. The three of them stood as the Coldstream Guards band played the anthem, before President Trump joined the Queen for an inspection of the troops.

The Duke of Edinburgh was not present when the Queen greeted President Trump and the first lady, the BBC reported.

The Queen introduced both President Trump and his wife to members of the royal household, according to the BBC.

The Trumps should have expected a high tea, rather than a banquet, for their meal during the visit, according to CNN.

The only U.S. leader who did not meet Queen Elizabeth during their term or her reign was Lyndon B. Johnson, TIME reported. He reportedly only made state visits to Asia while he was in office.

After tea, President Trump and the first lady are expected to go to Stansted for a flight to Glasgow, the BBC reported. They are also supposed to travel to President Trump's golf resort at Turnberry in south Ayrshire during their trip.

Protestors, or "hordes of demonstrators," as CBS News dubbed them, organized in Central London on Friday to protest President Trump's visit to the U.K.

President Barack Obama was the most recent U.S. president to meet with Queen Elizabeth. Besides a state visit in 2011, Obama and first lady Michelle Obama met the Queen twice more, TIME reported.

In fact, on her 90th birthday, President Obama said the Queen is "truly one of my favorite people.”

One person Trump is not expected to meet during this visit to the U.K. is Prince Philip, who is now retired, according to CNN. He was not expected to attend the meeting between his wife and President Trump at all.

Trump was reportedly excited to meet Queen Elizabeth, according to CNBC.

Mary Jo Jacobi, a former aide to President Ronald Reagan and a member of the George H.W. Bush administration, said in an interview with CNBC’s Squawk Box Europe, "He has already won, he is meeting with the queen and his lifelong wish has been meeting with the Her Majesty so from his personal perspective it is a win already."

So President Trump will probably enjoy seeing photos of his visit with Queen Elizabeth long after the trip is over.