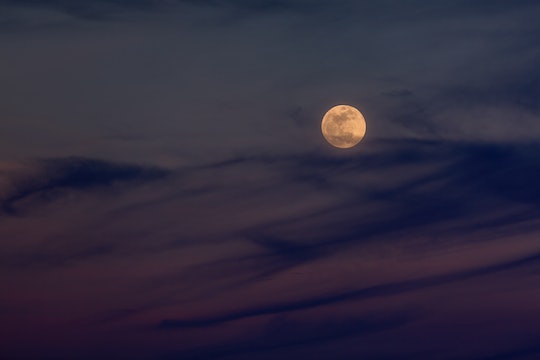 Few things in this world have the ability to capture the attention of people of all backgrounds, besides, you know, a reality television star being elected president. But sometimes, a natural phenanom will take place and humans will all look up in amazement. And even if you missed it, the photos of the super blue blood moon will definitely still take your breath away.

The lunar event Wednesday morning is definitely one for the books. According to NASA,

It’s the third in a series of “supermoons,” when the Moon is closer to Earth in its orbit -- known as perigee -- and about 14 percent brighter than usual. It’s also the second full moon of the month, commonly known as a “blue moon.” The super blue moon will pass through Earth’s shadow to give viewers in the right location a total lunar eclipse. While the Moon is in the Earth’s shadow it will take on a reddish tint, known as a “blood moon.”

So, basically, it was a total event with plenty of reasons to watch. However, because the super blue blood moon started at 3:48 a.m. Pacific Time, according to USA Today, it's understandable that you might not have been able to see the moon in person. But fortunately, some few good citizens have uploaded their photos of the moon online, and they're really something.

Unfortunately, not everyone was able to get a clear view of the super blue blood moon Wednesday morning. As TIME reported, "The East Coast, eastern South America, western Africa and parts of Europe will not get a clear view of this lunar eclipse." So in case you weren't able to see the moon in all of it's glory, there's nothing to worry about. There are plenty of live streams, time-lapse videos, and high-quality photos to tide you over.

Now, if you've ever heard the phrase "once in a blue moon," you might be aware that this kind of event is really rare. As USA Today reported, this super blue blood moon is the first of its kind to take place since 1866. It's basically a once-in-a-lifetime celestial event, and you should definitely check out all the photos of it that you can, because it might just distract you from all the chaos happening in the word right now.

During Tuesday night's State of the Union address, many online were looking to funny moments during Trump's speech to distract them from what was actually being said and just how many inaccuracies there were.

"I have always been fascinated by the night sky," Johnston said, according to NASA's website. "Most of what we can see without a telescope are points of light, but the Moon is close enough that we can see it and the features on it, and notice what changes and what stays the same each night."

While there are lunar eclipses fairly often (about once a year), that doesn't mean that Wednesday morning's super blue blood moon was any less special. Because even though there's so much happening in the world right now, from the threat of nuclear war to special counsel investigations into a foreign power threatening the democracy of the United States, the super blue blood moon is just the right kind of natural beauty to remind you that there's still some good in the world after all.

More Like This
Breastfeeding Twins: Everything You Need To Know
Barre Could Be The Low-Impact Prenatal Workout You Need
Janet Jackson's Son Eissa Is A Little Musical Prodigy In The Making
Princess Charlotte Got So Excited To Shake A Royal Fan's Hand