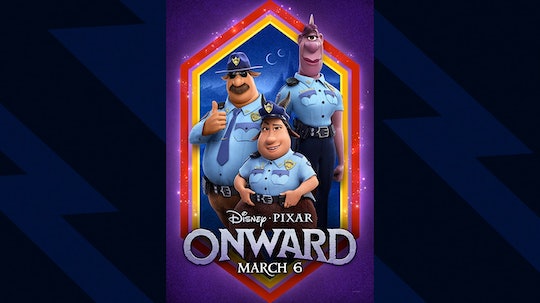 In an exciting move towards representation and inclusivity, Disney's Pixar will introduce a lesbian character in Onward, which lands in theaters on March 6. The character, Officer Specter, reportedly has a small role in the film, but it's an integral one.

Pixar's new fantasy film follows two teenaged elf brothers — voiced by Tom Holland and Chris Pratt — who discover a wizard's staff and embark on an epic quest fueled by magic and comedy. The film is set in a suburban fantasy world and meant to be modern by all accounts. In the course of their adventures, the brothers meet a spunky cyclops cop who just so happens to be a lesbian, named Officer Specter played by actor and writer Lena Waithe, who once described herself as "proud to be a gay, black female."

Speculation about potential LGBTQ characters in Onward first began on Reddit a few months back, following the release of the film's first trailer, which appeared to show a female couple. Disney confirmed the rumors in an interview with Yahoo!, as Kori Rae, a producer of Onward, told the outlet that the scene was a natural fit for the world they created.

"It just kind of happened," she said. "The scene, when we wrote it, was kind of fitting and it opens up the world a little bit, and that’s what we wanted."

Officer Specter has just one scene in Onward, according to the Advocate, but her role is an important one. When the brothers run into a bit of legal trouble, they speak with law officers about the changing dynamics of their family, namely the new man in their mother's lives. Waithe's character sympathizes with them, speaking about her own experience entering a family. "My girlfriend’s daughter got me pulling my hair out," she says, according to the Advocate.

And while the unnamed girlfriend doesn't appear in the film, her mere mention is an important step toward LGBTQ representation. Following similar speculation about what appeared to be lesbian moms in Finding Dory, Andrew Stanton, co-director of that film, made waves when he failed to confirm the rumors. “They can be whatever you want them to be," he told USA Today. "There’s no right or wrong answer."

But an out and out lesbian couple in a Pixar film provides powerful representation. And for those left wanting more, Onward producer Rae told EUR that she's holding out for a Spector spinoff. "I want to make a whole new movie about Officer Specter, we already have the material. [Waithe] basically wrote it all and gave us a backstory," she said. It's not clear if Pixar is on board with her hopes, but in the meantime, you can meet Officer Specter and the rest of the cast when Onward premieres on March 6.

More Like This
Chris Evans Has Choice Words For Critics Of The Same-Sex Kiss In 'Lightyear'
Kristen Bell Just Hinted That 'Frozen 3' Is Maybe (Hopefully!) In The Works
Here’s What The Voices Behind The Characters Of Lightyear Look Like In Real Life
Emma Thompson Shotputs A Child As Miss Trunchbull In The Matilda Musical Trailer