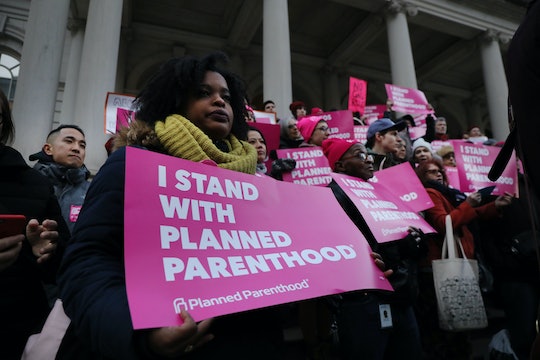 This Is How Planned Parenthood Is Fighting Against Abortion Bans

This year has seen an unprecedented moves to ban abortions. Alabama, Georgia, Kentucky, Ohio, Louisiana, Mississippi, and Missouri have enacted gestational age restrictions and in Missouri, elected officials are moving to close the only remaining abortion clinic in the state. But one group is gearing up for whatever comes next. Planned Parenthood aims to fight abortion bans with a huge new campaign.

Planned Parenthood just debuted their new campaign, with a larger than life ad right in the middle of Times Square in New York City, a move that was most likely a six-figure digital ad buy, according to Refinery29. And it has a bold slogan, "Get Your Bans Off My Body." It will be on display until July 1.

All in all, it's been a bad year for women's reproductive rights. Between January 1 and May 20 of 2019, nearly 400 new abortion restrictions were introduced, according to Refinery29's report.

So far, Alabama has one of the harshest abortion bans in place. In addition to the heartbeat bill that bans abortions after a fetal heartbeat can be detected, the state would also criminalize abortion providers with no exception to victims of rape or incest, according to CNN.

Many fear that the end to Roe vs. Wade is near thanks to a conservative Supreme Court and a Trump/Pence White House, according to NPR. This is the reality, even though 77 percent of American's favor of safe, legal abortions.

As it stands, one in three women of reproductive age live in a state where abortion could be banned completely if Roe vs. Wade was overturned, according to Planned Parenthood. That amounts to an estimated 25 million women.

While Planned Parenthood is a non-profit organization that provides safe reproductive healthcare for all, it also provides abortions, which is why so many conservative lawmakers try to defund them year after year, as reported by Paper.

A recent study from the World Health Organization showed that outlawing abortions would force women to seek unsafe alternatives to end pregnancies. These alternatives could be life threatening not just to the fetus, but also to the women.

And, the list of hits to a woman's right to choose and access to safe and affordable healthcare keep coming.

While it's important to note that abortion is still legal in all 50 states, extreme bills and laws from conservative lawmakers make it nearly impossible in the majority of states.

Along with the new campaign, Planned Parenthood is also asking supporters to sign a petition that will be sent to lawmakers. It reads:

To those who want to deny our access to safe, legal abortion: Our bodies are our own, and we must be able to control our health, our lives, and our futures. Across the country, some lawmakers are trying to tell us what we can and can't do with our bodies. But we can't and we won't go back. We won't let the abortion bans sweeping the country put our lives and futures at risk, and we won't be silenced while our fundamental right to control our bodies is taken away. Abortion IS health care — and health care is a human right. Everyone deserves health care that's free of shame, stigma, or judgment. Together, we say: GET YOUR BANS OFF MY BODY.

Planned Parenthood isn't the only one fighting against this outright attack on women's reproductive health rights. Movie and television crews have moved out of states that restrict abortion rights. Tiffany Haddish postponed her Georgia show and Ariana Grande gave all her concert proceeds to Atlanta show to Planned Parenthood, according to Refinery29.

Expect abortion right to remain a the top of political themes this year, especially as the 2020 presidential election nears. Here's hoping that organizations like Planned Parenthood continue to fight the good fight, for the little guys who just want access to safe care.