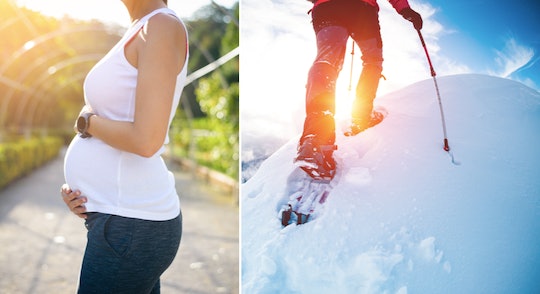 Climbing Mt. Everest & Carrying A Baby Are More Similar Than You Might Think

It's no secret that the process of pregnancy is a superhuman feat that requires a great deal of strength and energy. Researchers have since backed up this sentiment with data, claiming in a new study that pregnancy and extreme endurance sports have more similarities than previously thought. Translation: Give yourself a big pat on the back, parents.

An endurance sport is when "key muscles are exercised at submaximal intensity for prolonged periods of time," according to Medical Dictionary, a description that sounds quite similar to pregnancy because as medical experts have noted, the body's muscles change over time to support the growing fetus.

But up until Wednesday, there wasn't really any relevant data to back up these similarities. This all changed when the journal Science Advances published a study that analyzed caloric input and "performance data from athletes competing in the Race Across the U.S.A. — a grueling 4,800 km, 120 day race from California to Washington, D.C. — and compared it to a variety of other endurance activities, such as long distance trekking and pregnancy," according to CTV News.

The researchers also charted pregnancy stats because, as the study's lead author, Herman Pontzer, an evolutionary anthropologist at Duke University, noted, "If you think about it, [pregnancy] is like the ultimate endurance activity."

Ultimately, scientists determined that near the end of the race, the athletes who were burning "600 fewer calories per day than expected— 5,400 instead of 6,000," while "their metabolism slowed to about 2.5 times their basic metabolic rates," according to Quartz.

From this data, the scientists determined that a person can "successfully exert 4,000 calories on average" before their metabolic rates slow down and the body starts relying on its caloric reserves, according to CNN. This amount is "2.5 times the basal metabolic rate, or amount of calories a body needs to operate while at rest," according to Runner's World.

Researchers believe that these statistics represent the "ultimate limit of human endurance," according to Runner's World, which is a pretty cool finding in and of itself.

But what's even more interesting? Scientists discovered that a person's "energy use will peak at 2.2 times their resting metabolic rate," a number that's just decimals away from the metabolic rate of an athlete who runs long distance marathons. Phew.

Pontzer explained how these similarities occurred, noting, according to Jezebel:

Humans may have evolved to be capable of incredible endurance feats, which had the side effect of allowing us to have large babies. The reverse could also be true: evolving to have large babies gave us the capabilities to carry out extreme sports over long periods of time. There’s no reason it can’t be both.

The lead author also touched on the miraculousness of the human body, highlighting the difference between a high-endurance athlete and a pregnant person. "I think we all have the potential — but how do we reach it? With pregnancy your body takes over and you have no control over it," he said, according to CTV News. "Every mother who has gone through a pregnancy has experienced that effort themselves.”

Of course, anyone who has been pregnant or knows someone who is probably doesn't need these findings to know that pregnancy is an impressive feat. But it's pretty cool to see via scientific research that the endurance of a pregnant person is essentially equivalent to a professional athlete.