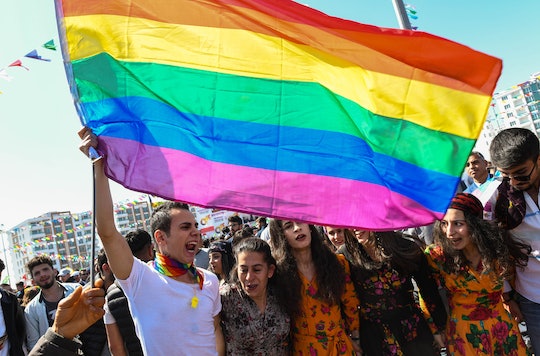 Every year, city buildings are doused in bright colors of the rainbow as the nation celebrates Pride Month. This year, however, the Trump administration reportedly rejected requests from U.S. embassies to fly the rainbow pride flag on embassy flagpoles during the month of June, according to NBC News. In defiance, the embassies are still celebrating LGBTQ rights despite the Trump administration's refusal by finding ways around the anti-pride policy.

Diplomats reportedly told NBC News that U.S. embassies in Israel, Germany, Brazil, and Latvia were among those that requested permission from the U.S. State Department to fly the pride flag and were denied. According to ABC News, the department's guidance prohibits pride flags from being flown on the official embassy flagpoles, overturning the Obama administration's previous "blanket written authorization" that allowed embassies to "display the pride flag on the external-facing flagpole."

Despite the new administration's policy requiring embassies to obtain permission and its ensuing denial of the requests, embassies are flying pride flags elsewhere on the official grounds — from flags strung directly onto embassy buildings in Seoul and Chennai, India, to embassies being flooded with large rainbow lights in New Delhi, as noted by the Washington Post.

In 2011, the Obama administration issued a presidential memorandum that directed agencies involved with foreign policy to promote and protect LGBTQ rights abroad. His support for the LGBTQ community was made clear during a speech to the United Nations that same year, when he said, "No country should deny people their rights because of who they love, which is why we must stand up for the rights of gays and lesbians everywhere."

This attitude has drastically changed under the Trump presidency.

While Trump did release a statement on his Twitter at the end of May commemorating the "outstanding contribution LGBT people have made" and expressing solidarity with LGBTQ people persecuted abroad, his statement is in direct contrast with his policies at home.

In October 2018, the Trump administration announced that it will no longer provide visas for same-sex domestic partners of foreign U.S. diplomats and United Nations officials. At the time, the former U.S. Ambassador to the United Nations Samantha Power tweeted against the policy, calling it "needlessly cruel and bigoted."

Perhaps Trump's most known anti-LGBTQ policy remains his ban on transgender individuals serving the military, which he announced in July 2017. Just this April, the Department of Defense announced that those wishing to join the military are immediately disqualified if they have been diagnosed with gender dysphoria and are taking hormones or have already undergone gender transition.

What's more, the Trump administration released a proposal earlier last month that would make it much harder for transgender patients to receive medical care. The Department of Health and Human Services proposed to roll back on an Obama-era policy that prohibited health care workers and health insurance agencies from discriminating on the basis of gender identity. Getting rid of the protections, as proposed by this administration, would allow medical providers to refuse to see transgender patients entirely, including for routine care, in addition to refusing care for transition-related reasons.

Despite this administration's seemingly verbal support for the LGBTQ community and a statement of solidarity by Trump kicking off Pride Month, it is clear from small changes like prohibiting embassies from flying the pride flag to larger policy shifts like the transgender military ban that this administration is anything but Proud.