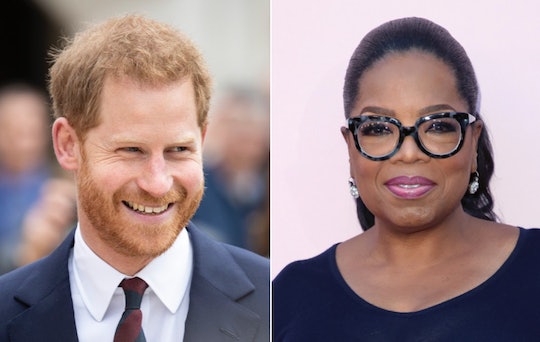 Next month marks Mental Health Awareness Month, a cause that the Duke of Sussex already seems to be preemptively addressing. The Duke and Duchess of Sussex’s official Instagram account announced on Wednesday that he is collaborating with Oprah Winfrey to address mental health awareness in a multi-part documentary. And while its release isn't necessarily around the corner, Prince Harry and Oprah Winfrey’s new mental health series is set to launch on Apple TV in 2020.

According to the social media post announcing the pair’s collaboration, the project has been in the works for several months and hope to spread awareness on a global scale. “The dynamic multi-part documentary series will focus on both mental illness and mental wellness, inspiring viewers to have an honest conversation about the challenges each of us faces, and how to equip ourselves with the tools to not simply survive, but to thrive,” Prince Harry said on Instagram.

“I truly believe that good mental health -- mental fitness -- is the key to powerful leadership, productive communities and a purpose-driven self,” the Duke of Sussex said. He hopes that the series will be “positive, enlightening, and inclusive” as the “vital series” shares stories from around the globe of “unparalleled human spirit fighting back from the darkest places.”

Winfrey told CBS This Morning that the collaboration began when she asked him what he thought were the most important issues facing the world today. “He said there are two,” Winfrey said, according to The Guardian. “He said climate change and he said mental wellness.” When Winfrey told him about the series she was already working on with Apple, he expressed his interest about getting involved.

Winfrey said during her appearance on CBS This Morning that she and Prince Harry have had several secret meetings in London already and that he will be co-creating the series as the executive producer alongside Winfrey.

“Our hope is that it will have an impact on reducing the stigma and allowing people to know that they are not alone, allowing people to speak up about it and being able to identify it for themselves and in their friends,” Winfrey said on the show.

The Apple TV series builds on Prince Harry’s previous work with communities and youth throughout the United Kingdom to raise awareness surrounding mental illness. In the past, he has even opened up about his personal struggles with mental health following the passing of his mother, Princess Diana.

“My way of dealing with it was refusing to ever think about my mum because why would that help? It’s only going to make you sad. It’s not going to bring her back. It was 20 years of not thinking about it and then two years of total chaos,” he said in a podcast interview with The Telegraph in 2017.

The prince also launched a “Heads Together” mental health campaign in 2017 alongside his brother, Prince William, which leads a coalition of mental health charities meant to provide support for those afflicted with a mental illness.

Now, the initiative led by Winfrey and Prince Harry comes amidst a social media movement #MyMentalHealthIs launched by the National Health Services (NHS) in the United Kingdom. The hashtag is encouraging social media users to share their experiences with mental illness and highlights its universality.

With two of the world’s most notable names working on an a documentary series to spread awareness, 2020 will hopefully bring significant improvements to the stigma surrounding mental health.