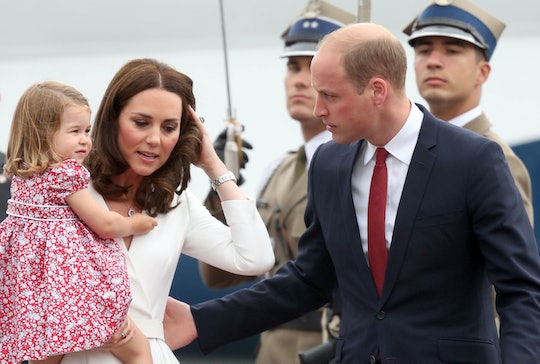 The Duke of Cambridge doesn't often gush about how much he clearly adores his family, so when Prince William compared Princess Charlotte to Kate Middleton during a recent visit to South Wales, you can hardly blame people for taking notice and letting out a collective "awww!" I'm sorry, but it's just very adorable.

The Duke and Duchess of Cambridge were in the resort area of Mumbles, South Wales on Tuesday when one of their many royal fans had something to sweet say about their 4-year-old daughter Princess Charlotte. According to the Daily Mail, a woman in the crowd of well-wishers apparently wanted Prince William to know that the little girl was her favorite of the royal children, which makes me sort of glad that 6-year-old Prince George and 22-month-old Prince Louis weren't there to hear what she had to say. Still, Prince William apparently accepted what the woman had to say as a compliment to his daughter because he responded by saying: "Yes, she's lovely. Just like my wife," the Daily Mail reported.

This was sort of the perfect response as it managed to pay a compliment to both his wife and his daughter while avoiding playing favorites. A future king indeed.

Both Prince William and Middleton have made it clear that they are hands-on parents who love to spend time with their children. And they both seem to know their little ones quite well, often sharing small details about their private lives to give royal watchers a glimpse at how their family works.

For instance, back in May the family shared a video on Instagram of the "Back to Nature" garden Middleton created, which featured casual footage of the Cambridge family playing together in the garden. At one point in the video, Prince William could be heard calling his daughter by her adorable nickname, "Mignonette," which is French for darling, sweetie, or cutie. Be still my maternal heart.

While Prince William and Middleton have been incredibly careful about public displays of affection in the past — which means nothing, of course — it seem they might be loosening up with that particular rule lately. During their recent South Wales visit, the couple were pretty affectionate, according to The Mirror, with Prince William touching his wife's back and the two leaning into each other.