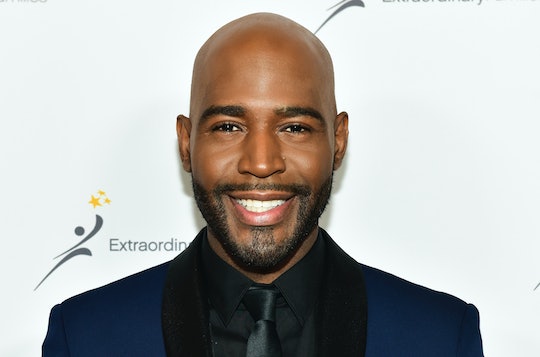 Reality star and activist Karamo Brown is arguably best known for his work on Bravo's Queer Eye, but behind-the-scenes, he's a dad to two sons. And in an effort to help other children embrace their authentic selves, Karamo Brown wrote a children's book alongside his eldest son, 22-year-old Jason "Rachel" Brown.

Brown's journey to fatherhood is a unique one. Out of the blue one day in 2006, Brown found an "envelope at his doorstep subpoenaing him for $230,000 in back child support" for his 10-year-old son, according to Out magazine. Brown, an openly gay man, had no idea that he had fathered a son, and he immediately flew to Jason's hometown of Houston, Texas, to make up for lost time.

Brown soon learned that Jason's mother, Stephanie, was a high school friend with whom "he’d had sex one time when he was 15," according to People. The reality star also found out that Stephanie didn't file for child support, but that the state of Texas did when she filed for welfare benefits, according to Daily Mail.

Eventually, Stephanie agreed to give Brown full custody on the "condition that they remain a family," according to People. Brown later became the legal guardian of Stephanie's younger son, Christian, in 2011, according to Parents.

Cut to over a decade later, and now the father-son duo are co-authors of I Am Perfectly Designed, a children's book.

"So excited to announce that I wrote a picture book with my son, Jason @rachelssideburns to empower everyone to love who they are, exactly as they are!" Brown penned in a Thursday Instagram announcement. "Illustrations by @foxville_art are gorgeous! Remember you are perfectly designed too!"

Brown delved deeper into the book's message in an interview with Out, describing the story behind the catchphrase, "perfectly designed."

"When I became a father, I was really trying to instill in him the confidence that he can be whatever he is, no matter what people told him," the dad explained. "People would make him feel like he wasn't good enough. I tried to consistently instill that he was. And as he's grown up now and turned into one of the most exceptional people I know, I decided that there should be a way of passing on this sort of lesson that I gave to him in a new way."

He added: "So we decided to do a book together — a children's book that could be utilized for parents, for kids, and for anyone really who just needs that boost in confidence that they are enough and that they are perfectly designed."

Jason spoke to the outlet about how his dad's advice has shaped his life, stating: "For me, the biggest thing was just really being yourself, I think that was one thing my dad really, really pushed in me that I literally live through my life nowadays."

He continued: "It's like I wake up and I remember I'm naturally, literally perfect the way I am. And there's nothing that anyone can take from me that can change that."

Brown and Jason's mission is an important one, especially since many young people struggle with healthy self-esteem. And depression, which is closely linked to self-esteem, is prevalent among teenagers. In fact, "about 20 percent of teens will experience depression before they reach adulthood," according to DoSomething.org.