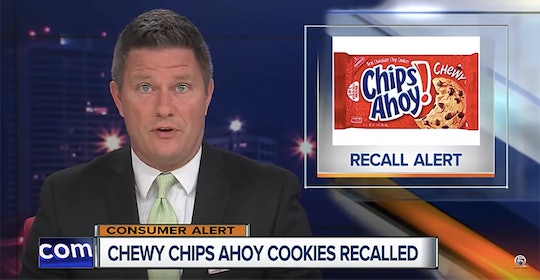 Some Chips Ahoy! Cookies Have Been Recalled Due To An "Unexpected" Ingredient

If your child loves sweets, it's probably a good idea to check your pantry for a popular brand of cookies. The parent company of Nabisco, Mondelēz Global LLC, announced on Saturday, April 13, that it has voluntarily recalled certain Chewy Chips Ahoy! cookies due to an "unexpected solidified ingredient," according to the Miami Herald. Given the mysterious nature of the recall, it's fair that some parents may want to know more about this possible safety hazard and whether their cookies are compromised.

UPDATE: Mondelēz Global LLC told Romper in a statement on Wednesday, "In some instances, the cornstarch in our Chewy Chips Ahoy recipe did not fully incorporate in the mixing procedure and solidified in the baking process." The statement added that the "vast majority of consumers have not reported adverse events" with the products included in the recall, though "a small number of consumers have reported gagging, choking or dental injury, but none of these reports have been confirmed at this time."

"We issued this voluntary recall as a precaution, as the safety of our consumers is our top priority," the statement concluded.

EARLIER: I tend to prefer salty foods over sweets, but I can't resist an addictive Chips Ahoy! cookie. Perhaps it's my nostalgia for those days when my mom would include some in my bag lunch, or maybe it's the fructose corn syrup. Either way, Chips Ahoy! cookies are beloved by many, especially young kids. And given the brand's popularity, some people are concerned about the recall of certain Chips Ahoy! cookies.

For starters, this voluntary recall involves some batches of Chewy Chips Ahoy! cookies in 13 oz. bags, according to WDRB.

The company also advised consumers to "not eat" the potentially affected products.

Again, Mondelēz Global LLC did not elaborate on what the "unexpected and solidified ingredient" is, but it did warn consumers that "some reports of potential adverse health effects have been received," according to a recall announcement.

Next, find the expiration date, which can be found on the top left side of the package by the lift tab:

It's also important to note that the recalled cookies were sold nationwide, and is only being conducted in the United States.

If your cookies are included in the voluntary recall, either throw the package out in the trash or return it to your local grocery store for a refund.

Some customers are taking to Chips Ahoy!'s Facebook page and Twitter account to ask the company to identify the unexpected ingredient publicly. In a press release, Mondelēz Global LLCC advised consumers to "contact the company at 1-844-366-1171, 24 hours a day to get more information about the recall." Consumer Relations specialists are available Monday-Friday, 9 a.m. to 6 p.m. ET.

Of course, if you have any immediate concerns, don't hesitate to reach out to a trusted medical professional if you or your child exhibits any troubling symptoms.

As with any recall, it's a good idea to stay up to date with the latest information out there. And reach out to Chips Ahoy! if you have any unanswered questions.

More Like This
Can The Baby Have That?
This Is What Experts Say About Eating Hot Dogs During Pregnancy
The Covid Vaccine For Kids Under 5 Has Been Sent To The FDA For Review
I'll Be First In Line To Vaccinate My Kids, But I'll Never Forget That We Were Last