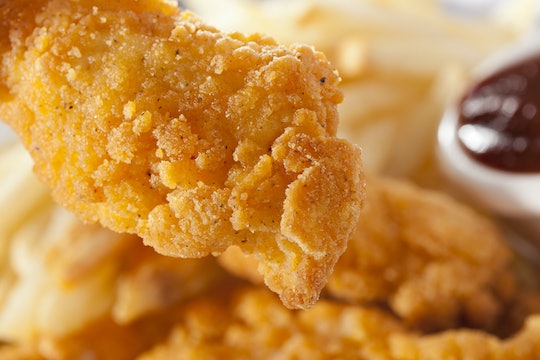 Food recalls are always a bit unnerving and after Tyson recalled some ready-to-eat chicken amid fears it may contain pieces of plastic, parents are likely concerned about what's in their fridges and freezers. But what's important to know about this recent recall is that the recalled food wasn't sent off to grocery stores — it was sent to "institutional foodservice locations nationwide," including schools across the country, according to U.S. Department of Agriculture's Food Safety and Inspection Service (FSIS).

According to the FSIS, the agency was notified of the problem last week on June 5 after Tyson informed it of "three consumer complaints from schools of foreign material in the breaded chicken fritter product." It's not clear where exactly the complaints came from.

"Tyson Foods, Inc. distributed the product to institutions, including schools. While the product was distributed to schools, it resulted from a commercial sale and was not part of food provided by the USDA for the National School Lunch Program," the recall notice stated.

Romper has reached out to Tyson Foods, Inc. for further comment on the recall, but did not immediately hear back.

The potentially contaminated ready-to-eat chicken items were produced on Feb. 28, 2019 and have the lot number "P-1325."

Though there have been complaints, fortunately there have been "no confirmed reports of adverse reactions due to consumption of these products," according to the FSIS, which added that "anyone concerned about an injury or illness should contact a healthcare provider. "

Schools and foodservice locations that may have received the recalled chicken can cross-check their supply with the label below.

Tyson has issued multiple recalls chicken products in recent months following concerns that foreign objects potentially made their way into the food.

In March, the company recalled more than 69,000 pounds of chicken strips because it feared they may be contaminated with bits of metal. The FSIS warned that crispy and buffalo varieties of Tyson frozen chicken strips were involved in the recall, saying it was "concerned that some product may be in consumers' freezers." FSIS received two complaints before issuing the recall. Again, no one was injured or sickened due to the possible contamination.

Months before that, Tyson recalled about 36,000 pounds of "White Meat Panko Chicken Nuggets" due to concerns they were contaminated with rubber, CNN reported in January. "Those products should be thrown away or returned to the place of purchase," the FSIS said at the time regarding the January recall.

Food recalls are always concerning, but they also serve as a reminder to remain aware and in-the-loop about food safety news. Knowledge is power, especially when it comes to what you and your family are consuming. For parents concerned about this latest recall, be sure to reach out to your child's school and inform them about the recall. And if your child's school participates in the National School Lunch Program, the chicken they serve should be in the clear.

More Like This
6 Takeaways From The White House’s First-Ever Parents Press Conference
5-Year-Old Boy Died In Hot Car As His Family Prepared For Sister's Birthday Party
Can You Light Fireworks In Your Backyard?
Can The Baby Have That?