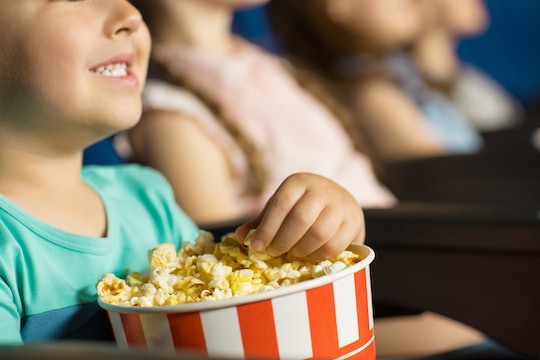 If your kids are already asking "What are we going to do today?" before your head even leaves the pillow, then you're probably experiencing what most parents go through every summer — the battle to keep kids busy and complaint-free without breaking the bank. But good news: summer, budget-friendly movie tickets might just be your answer to those long summer days without much to do, thanks to Regal Cinemas' $1 movie ticket deal kicking off next week.

All summer long, Regal Cinemas is offering $1 family movies on Tuesdays and Wednesdays at 10 a.m., according to NBC Los Angeles. And you can expect to see favorites like Shrek, Kung Fu Panda, The Croods, and more back on the big screen for one very low price. The promotion starts tomorrow, June 4, and runs through Sept. 4, with two movies being shown on each day.

Beyond scoring a great bargain, parents will also get roughly 90 or more minutes of quiet time in a dark, cozy theater resting up for whatever else the day has in store. And, of course, the air conditioning in the theaters will be a definite draw once those summer temps begin to soar.

“Summer Movie Express is one of the hottest annual deals Regal offers to its moviegoers. We invite people of all ages to join us for three months of fun and entertainment as we feature family-friendly blockbusters,” Ken Thewes, Regal’s Chief Marketing Officer, said in a statement, according to Fox News Sacramento. “This summer program is the perfect way for families to spend quality time together while enjoying a big screen experience.”

For a complete list of the scheduled movies, check out Regal Cinema's website for all the info.

Regal Cinemas isn't the only movie chain with too-good-to-be-true summer specials. Other big cinema chains are also offering similar deals for moviegoing on the cheap, such as Cinemark's $1 movie ticket deal that you can cash in on with its Summer Movie Club House promotion for 10 weeks running now through Sept. 8, according to the company's website. You and your kiddos can take your pick from Sherlock Gnomes, The Grinch, Smallfoot, Peter Rabbit, The Spongebob Movie: Sponge Out of Water. and more.

AMC is upping the game a bit as well, with a movie ticket plus a kids pack (drink, popcorn, candy) for just $4. This special runs every Wednesday for nine weeks and you can check with your local AMC theater for more info. (Hint: movies like Trolls, Lego Movie 2, and Hotel Transylvania 3 are on the docket.)

And if you don't feel like leaving home for a great movie deal, Amazon is offering 99 cent movie rentals everyday on Amazon Prime. You can get a jump start on fall by watching Halloweentown or get nostalgic with the High School Musical movies. There's also dozens of animated favorites for rent, too.

Considering that the average parent spends about $500 on just one week of summer camp, according to Care.com, these are all incredible deals that won't break the bank. So, how will you and your crew be spending your free summer hours? If you're on a budget, like most families are, then a few discount movies from any of these major chains might be in your immediate future. Just don't to save a little extra cash for the buttery popcorn.

More Like This
Lyle, Lyle, Crocodile Is Heading To The Big Screen As A Musical Comedy
WowWee’s New Fairy Finders Will Keep Kids Distracted For Hours
The Covid Vaccine For Kids Under 5 Has Been Sent To The FDA For Review
Prince George Hosted A “Little Cake Sale” For One Of His Dad's Favorite Charities