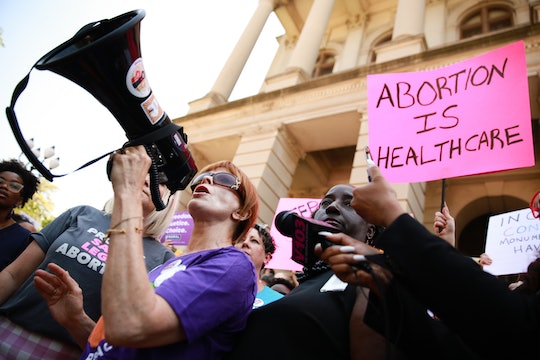 Over 180 Companies Declare Draconian Abortion Bans Are "Bad For Business"

There are a myriad of reasons supporting abortion access makes sense. It keeps women safe, it lowers the number of abortions that occur, it gives women equal bodily autonomy to men... the list goes on. Now proponents are taking a new approach, pointing out that restricting abortion care is actually "bad for business" in the "Don't Ban Equality" statement, which positions reproductive health care as workplace issue.

The statement was signed by CEOs from 180 companies who represent over 108,000 workers, according to a press release from NARAL, who led a coalition to organize the participating businesses. The statement intends to shed light on the harm taking away reproductive health care can have on not only women and those seeking care, but companies themselves, appealing to the economic sensibilities of consumers, workers, and investors.

"Restricting access to comprehensive reproductive care, including abortion, threatens the health, independence and economic stability of our employees and customers. Simply put, it goes against our values and is bad for business," Don't Ban Equality states on its website.

A wide variety of companies are represented in the signatories, ranging from Bloomberg and MAC Cosmetics to Postmates and The Wing. The statement ran as a full-page ad in The New York Times today, June 10, (a publication President Donald Trump consistently berates on Twitter), giving the advocates a huge platform in which to call attention to their cause.

The proponents framed reproductive health care as an issue of workplace equality in the statement, arguing that restricting women's health care "impairs [the companies'] ability to build diverse and inclusive workforce pipelines, recruit top talent across the states, and protect the well-being of all the people who keep our businesses thriving day in and out."

For instance, logistical difficulties of getting an abortion are increasing as providers become rarer, forcing women to take more time off work to get them in order to travel to a clinic. This time off will hurt corporations because they will either have to hire temp workers or deal with the repercussions of having fewer workers, and that's just one example of the business impact decreasing reproductive health care can have on women.

The statement comes in the wake of a series of legislations intended to directly limit women's access to abortion, including so-called "Heartbeat Bills" that deny women the right to abortion after six weeks. Anti-abortion activists view these bills as a potential opportunity to overturn Roe v. Wade, hoping legal bouts around them will lead to a Supreme Court challenge. The confirmation of Brett Kavanaugh to the Supreme Court in 2018 gave the court a 5-4 conservative leaning, making it more likely Roe could be overturned. No "Heartbeat Bill" has reached the highest court in the land yet, though.

Leaders of pro-choice legislation have spoken up in favor of the statement, including Planned Parenthood President and CEO Dr. Leana Wen.

"We are grateful and inspired to have so many business leaders standing with us proudly and publicly to oppose these dangerous, unprecedented attacks — raising the alarm about the chilling effect on their employees and the communities where they do business...And now more than ever, we must stand together to declare that reproductive health care, including abortion care, is necessary for all people to live healthy, successful lives," Wen said in a statement on Monday.

Businesses are still welcome to join the Don't Ban Equality coalition, and the coalition's website provides a template to help employees ask their companies to join as well. If reproductive rights aren't enough of a reason to convince people abortion is indeed health care, perhaps business sense will be.