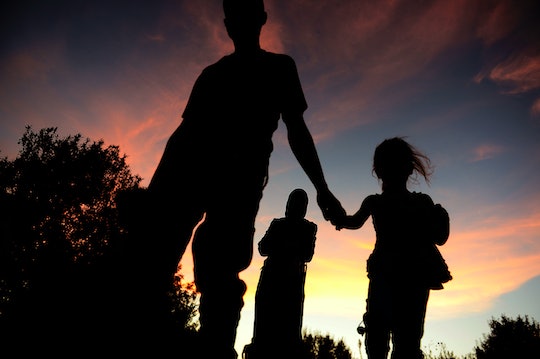 Parents separated from their children at the U.S.-Mexico border may have to wait much longer before they're with their kids again. In court documents filed on Friday, April 5, as The New York Times reported, the Trump administration revealed that reuniting immigrant children separated from their families may take up to 24 months. According to TIME, the filing said the process will take so long because the children are no longer in government custody.

The court filing claims that the Trump administration needs the time to review about 47,000 cases of children separated from their families between July 1, 2017 and June 25, 2018, TIME reported. The latter date is one day before district court judge Dana Sabraw ordered the administration to reunite 2,700 children separated from their families, CNN reported at the time.

The family separation crisis was revealed when former Attorney General Jeff Sessions publicly announced the administration's zero-tolerance policy in May 2018, according to USA Today. The atrocities that happened at the border led to public pressure on President Donald Trump to issue an executive order rescinding the policy, which he did in June, according to NPR.

But in January 2019, a report from the Office of Inspector General revealed that the zero-tolerance program had been in place longer than previously thought, starting sometime in the summer of 2017. As a result, in March 2018, Sabraw expanded the order to reunite so it included those families separated since the program began, the New York Post reported.

The administration claims that the process will take up to two years because it did not collect some information on family separations prior to April 2018, The New York Times reported; it claims that these children came across the border during a time when they would have been put into shelters or foster care and that it doesn’t have the details of where they might have gone.

In the filing, The New York Times reported, the government also claimed that manually reviewing 47,000 cases would put an undue burden on the Public Health Service Commissioned Corps; instead, they’re going to conduct a statistical analysis, as well as manual reviews, to identify the children most likely to have been separated. USA Today reported that the process "would take at least 12 months, and possibly up to 24 months."

Despite suspending the zero-tolerance program that led to this crisis, the administration has reportedly found ways around the court ruling and continued to separate families, according to Vox. Information released in February showed that 247 children had been separated from a parent at the border since the ruling went into effect, according to a report from the Texas Civil Rights Project, and that number doesn’t include children separated from a sibling or other relative.

And the president has reportedly continued to push for the zero-tolerance program to be reinstated, an issue that led to the resignation of his Homeland Security Secretary Kirstjen Nielsen, as NBC News reported. Sources who spoke with NBC News reported that Nielsen told Trump that the program could not be restarted due to court orders preventing it. Kevin McAleenen, head of Customs and Border Control, will reportedly take over as acting Homeland Security secretary, according to CNN, and he is expected to consider a program that would give parents “…the option between being separated from their children or bringing their children with them into long term detention,” as NBC News reported. (Romper's request for comment from the White House was not immediately returned.)

That’s a fight that’s yet to come, but right now the ACLU continues to advocate for swift and full reunification of all families.