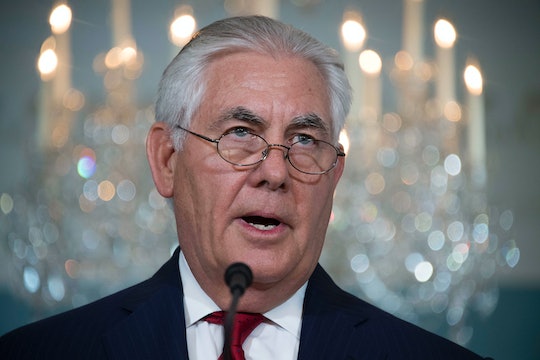 Rumors surfaced Wednesday that the Trump administration almost lost yet another employee. An NBC News report published Wednesday claims that there's still more trouble in paradise, detailing a July Pentagon meeting during which the secretary of state almost quit after calling President Donald Trump a "moron." Tillerson shut down the allegations in a press conference, but Twitter users have embraced the insult, and these Rex Tillerson "moron" memes and jokes will have you rolling on the floor laughing, which is preferable to the screaming panic attack we should all be having as a response to an imploding presidency.

According to the report, Tillerson made the remark to several Cabinet and national security officials after a situation room meeting on Afghanistan, during which Trump compared military strategy to "the renovation of a high-end New York restaurant," according to NBC. A week later, the report claims, Tillerson almost quit again, after Trump hijacked the Boy Scouts Jamboree and turned it into one of his trademark post-campaign rallies. Vice President Mike Pence is said to have counseled Tillerson on how to get along with Trump, who continues to clash with the Secretary on a number of issues. This past weekend, Trump tweeted that Tillerson was "wasting his time" trying to prevent a war with North Korea.

State Department spokesman R.C. Hammond told NBC that Tillerson did not call Trump a "moron," and had not considered resigning, but Tillerson's own response was more tepid. During a press conference late Wednesday morning, the secretary of state said that he had "never considered leaving this post," according to CBS News, but when asked to address the "moron" comment, he would only say, "I'm not going to deal with petty stuff like that," stopping short of an outright denial.

His response appears to have been good enough for Trump, however, who immediately tweeted, "The @NBCNews story has just been totally refuted by Sec. Tillerson and @VP Pence. It is #FakeNews. They should issue an apology to AMERICA!" However, the story was not totally refuted, and while NBC has added Tillerson's remarks to the report, an "apology to AMERICA" does not appear to be forthcoming, as the original report compiled information from over a dozen sources, including senior administration officials and "others who are close to the president."

In fact, one of the contributors to the report has doubled down on the claim. Appearing on MSNBC shortly after Tillerson's conference, journalist Stephanie Ruhle clarified, "My source didn't just say he called him a moron. He said he called him a f-ing moron."

Now, Twitter is no Gallup poll, but if you do a quick search, the clear consensus seems to be that Tillerson did use the M-word, and a lot of people are pretty amused by that.

The White House has basically devolved into a high-stakes reality competition, and America is reveling in the petty feuds between the contestants.

We're even bringing up people who were already "fired," like the administration's top villain, Steve Bannon. I'd call him "the Omarosa of the White House," but the actual Omarosa is also in the White House, so I guess that makes Bannon... The Abby Lee Miller, maybe? Or Spencer Pratt?

There's also speculation as to why Tillerson is staying on, if he despises his boss so much.

And of course, as is the case with every bit of Trump drama, someone's there to remind us what could have been.

The bottom line is that nobody but Trump is confusing Tillerson's brush-off with an unequivocal denial.

And there are more than a few people who agree with him.

This is probably not going to end well for Tillerson or Trump, but at least they can take comfort in the knowledge that they've provided hours of entertainment for the American people.