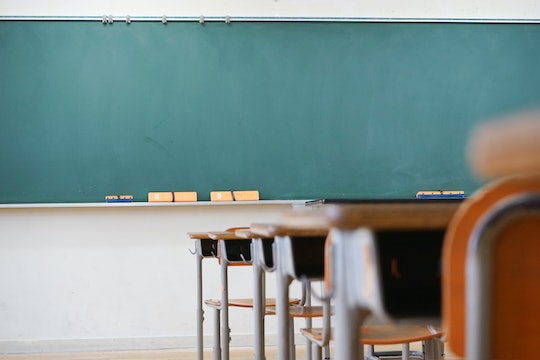 School Security Procedures May Not Be Sufficient To Keep Kids Safe, Study Finds

Gun violence is an ever-present threat for parents of school-aged children. And, when you can't count on your children being safe in school, what can you count on? A new study is making waves, and confirming parent's worst fears: School security procedures may not be sufficient to keep kids safe.

The study, published in the journal Violence and Gender, concluded that while schools are making many efforts to increase security measures and tighten school campuses, it may be causing "a false sense of security," according to ABC News Toledo.

To conduct the study, researchers at the University of Toledo and Ball State University, looked at 18 years of reports on school security measures and analyzed their overall effectiveness, according to Phys.org. As researchers wrote in the abstract:

Last year was the worst year on record for school shootings and gun violence in general, as Rolling Stone reported.

The Washington Post has been keeping a database of school shootings since the deadly 1999 Columbine shooting, and the numbers are startling. Since then, more than 226,000 children at 233 schools have been involved in gun violence. At least 143 people have been killed and 294 have been injured.

In fact, gun violence is the second leading cause of death for America's youth, according to Everytown.org. Combine that with the fact that about 3 million American children see gun violence each year, and those are some seriously disturbing numbers.

Schools work hard and spend millions of funds on inputting security measures like metal detectors, bullet proof glass, armed guards, school-wide alert systems and more. But the real problem is the fact that children have easy access to firearms in the first place, according to a news release from Ball State University.

"The ideal method for eliminating school firearm violence by youths is to prevent them from ever gaining access to firearms ... unfortunately, studies have found an alarming rate of firearms accessible to youth," researchers said, according to the Washington Post.

Case in point: Wednesday's reported threat to Denver-area schools by an 18-year-old Florida high school student who was allegedly interested in the deadly 1999 Columbine shooting. She allegedly purchased a plane ticket, traveled to Colorado, and immediately purchased a semi-automatic weapon, resulting in city-wide school closures, according to The New York Times.

The incident resulted in a manhunt by the FBI, which ended when authorities found the alleged suspect dead from a self-inflicted gun shot wound.

Ultimately, more research is needed to find definitive measures that will lessen the potential for gun violence on school campuses, and keeping kids from carrying and using guns, according to the research team, as Ball State University noted.

"School systems need to engage in collaborative research for evidence-based practices and policy advocacy through coalition building to address state firearm laws," researchers concluded in the study's abstract. "Schools also need to expand their mental health services and cost-effective educational interventions for reducing violence (e.g., bullying, peer mediation, conflict resolution, etc.). Hardening of schools seems to be a questionable endeavor for most schools, given the dearth of evidence regarding effectiveness."

Until then, there isn't much parents can do expect prepare their students with gun safety knowledge. The good news is, that some of the high schoolers who've lived through our nation's biggest school shootings are moving on to help pass gun control laws in congress and within their communities. They are the key to a safer future.