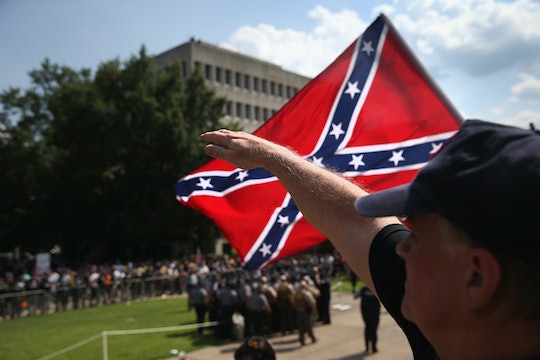 After an 11-year-old student objected to a racist gesture used by her classmates, a Tennessee elementary school has announced that it will no longer teach kids to do the Nazi salute, or Sieg Heil salute, as a part of its curriculum in class. As HuffPost reported, students of the McFadden School of Excellence in Rutherford County, Tennessee, had been taught to do the Nazi salute as a part of their history lessons on World War II.

Last Thursday, an 11-year-old student's father shared on social media that his daughter was removed from her class after telling fellow students to stop doing the Nazi salute, as BuzzFeed News reported.

James Evans, communications director for Rutherford County schools, told Romper in a statement, "As part of a World War II exhibit of Living History performed by fifth-graders at McFadden School of Excellence, a student portrayed Adolf Hitler, which involved him delivering a speech, and at the end, giving the Nazi salute." During a rehearsal on May 9, according to Evans, when the student gave the salute, "some other students in the class responded with the same salute."

Following the incident, the young student's father, Keith Jacks Gamble, posted about it on Twitter, saying that his daughter was "removed from class and sent to the principal’s office for the rest of the day last Thursday for shouting, 'Stop it, put your hands down now,' to a group of students giving the Nazi salute."

In a Twitter thread that's since gone viral, Gamble further shared that the hateful gesture had appeared outside of the rehearsal. "Children at the school have been giving Nazi salutes in the hallways and at recess for weeks, after a teacher assigned a student to give the Nazi salute in a Hitler costume for an assignment," he wrote on Twitter.

Per a detailed account Gamble shared on Twitter, he says his daughter spoke out although she was allegedly instructed by a teacher "not to address it." He wrote in a tweet, "She has been bullied by classmates and targeted personally with Nazi salutes, so school feels lonely sometimes."

Gamble also shared screenshots of emails with the school, detailing the chain of events, which suggest the 11-year-old student was removed from the classroom for being "disrespectful with her tone and body language to teachers" after she objected to the Nazi salute performed by multiple students during a rehearsal for the class' Living History performance.

Evans said in the school's statement to Romper, "When this occurred, one student became upset and had an outburst. The teacher talked with her and tried to calm the student, but was unable to do so. The teacher took her to the hallway for approximately two minutes to give her some time to calm down but to no avail." Evans also stated that the 11-year-old student was "not disciplined or punished in any way for her concerns or actions."

"In fact, the school agrees the actions of the students were completely inappropriate," the statement continued. "The principal also investigated concerns that the salute had happened more than once, and he was able to confirm two instances where some students gave the salute (outside of the history project). Teachers intervened in both confirmed instances. The principal held a meeting with all fifth-graders about what had happened and to put a stop to any further instances."

Evans also told Romper in the statement that school directors also sent an email to fifth-grade parents “to assure them we do not condone any type of symbolism or actions that can be interpreted as hate-filled or insensitive.” The statement said it it will no longer feature a student portraying Hitler or the salute as a part of its Living History project and will "find alternative means" to fulfill the history standard for its fifth-graders.

As for the brave 11-year-old, social media users are commending the fifth grader for continually being the voice of resistance even after facing backlash and bullying. And as for her father, he shared on Twitter that her "family is so proud of her."

More Like This
Dads Share What Paid Family Leave Would Mean To Them In Heartwarming Video
Exclusive Eureka! Clip Introduces Star Of Disney’s New STEAM Preschool Series
How Title IX Changed The World For Girls
How To Explain Juneteenth To Your Kids — With Joy & Truth