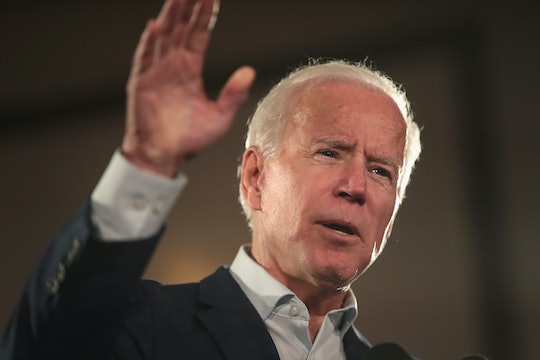 Everything We Know So Far About The Allegations Against Joe Biden

Though Joe Biden has not officially announced he's running for president in 2020, all eyes have been on the former VP recently. Over the past week, according to CNN, several women have alleged that Joe Biden inappropriately touched them. A representative for Biden did not immediately respond to Romper's request for comment on the accusations, but he did issue a response over the weekend.

"In the many years on the campaign trail and in public life, I have offered countless handshakes, hugs, expressions of affection, support and comfort," Biden wrote in the statement, as Slate reported. "And not once — never — did I believe I acted inappropriately. If it is suggested I did so, I will listen respectfully. But it was never my intention."

Biden issued the statement after Lucy Flores, a former Nevada assemblywoman and lieutenant governor hopeful, wrote on March 29 in The Cut that Biden leaned in behind her, smelled her hair, and allegedly "gave her a slow kiss on the back of her head" while he was campaigning for her in 2014, according to ABC News.

"I didn't even know what to do. I didn't know how to react," Flores told ABC News. "It was the vice president of the United States of America. You just don't expect that to happen." And two days later, Biden issued his statement.

A day after this statement was issued, others came forward. On Monday, Amy Lappos, a former aide to Democratic Connecticut Rep. Jim Himes, alleged that Biden inappropriately touched her without her consent during a 2009 fundraiser in Connecticut, according to CNN. In an interview with the Hartford Courant, Lappos said Biden didn't touch her in a "sexual manner" but instead, grabbed her "by the head."

"He put his hand around my neck and pulled me in to rub noses with me," Lappos told Hartford Courant. "When he was pulling me in, I thought he was going to kiss me on the mouth."

On Tuesday, two more women came forward with their own stories reportedly involving Biden, published in The New York Times. Caitlyn Caruso, a former college student and sexual assault survivor told The New York Times that Biden allegedly "rested his hand on her thigh" and hugged her for "just a little bit too long" during an event at the University of Nevada, Las Vegas, when she was 19 years old.

D.J. Hill, a writer who met Biden at a 2012 fundraiser in Minneapolis, Minnesota, also told The New York Times that Biden allegedly put his hand on her shoulder while taking a photograph together, and then started "dropping it down her back" which left her feeling uncomfortable. "Only he knows his intent," Hill told The New York Times.

Speaker of the House Nancy Pelosi told POLITICO on Tuesday she hopes that Biden can learn from this, and be more aware of a woman's personal space. "He has to understand that in the world we're in now that people's space is important to them, and what's important is how they receive it and not necessarily how you intended it," Pelosi told POLITICO.

Biden said in his statement on Sunday that he will continue to be an advocate and ally for women everywhere. "I will fight to build on the work I've done in my career to end violence against women and ensure women are treated with the equality they deserve," Biden wrote. "I will continue to surround myself with trusted women advisors who challenge me to see different perspectives than my own... And I will continue to speak out on these vitally-important issues when there is much more progress to be made and crucial fights that must be waged and won."