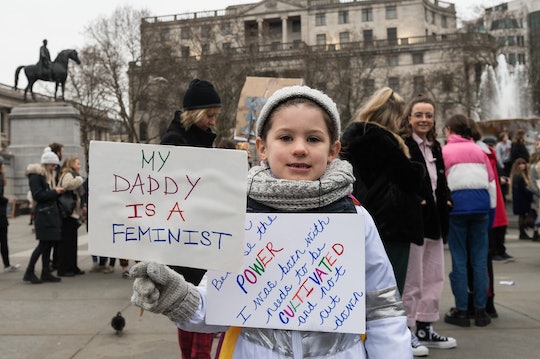 The third annual Women's March will take place on January 18 in Washington, D.C. and cities around the globe. Everyone is invited to participate and support a message of equal rights for all, but should you bring your kids to the Women's March?

While there's no actual rule about taking your children to a march, in my opinion, you totally should. Obviously, you should take into account how your child reacts to being in a crowd and how long they would conceivably be able to walk (or depending on their age, carried or strolled), but even if you go for just a brief amount of time, you will be sending an important message to your child: one of equality, and one that shows your kid (or kids) how important it is to stand up for themselves and others. The Women's March was founded on the belief that "Women's Rights are Human Rights and Human Rights are Women's Rights." And I truly believe that the sooner your little ones learn that equality is a right, not a privilege, the better citizens of the world they will become.

The Women's March first began in January 2017 as a worldwide protest of the inauguration of President Donald Trump due to his offensive behavior and divisive statements over the years towards and about women. It was the largest single-day protest in United States history, according to The Washington Post, with over 3 million people attending. Simply put, it was a moment, and a big one at that. I am proud to say I was at the first march in New York City with my daughter, who was 7 years old at the time. While I realize she was at a tender age to discuss a topic like women's rights, I took some helpful advice from other moms. Before the event, I sat down with my daughter to talk about the importance of protesting in simple terms. By keeping things simple, positive and upbeat ("we are marching because everyone should be treated equally"), the crowds we met on march day didn't seem overwhelming. In fact, we felt like we had joined one big parade (with a whole lot of pink hats).

Other suggestions included making child-friendly signs together before the march. What is your child's vision when they think about the fact that girls are equal to boys? I love these child-friendly Women's March signs, but honestly, "Girl Power!" gets straight to the point if you're feeling stuck. Also, make sure your bag is filled with water and snacks, that everyone is dressed warmly and wearing comfortable shoes, and if your child becomes over-stimulated, there's nothing wrong with stepping out of the march to watch on the sidelines. Allies can sit on a park bench and wave and chant, too.

While the Women's March has not been without its own set of power struggles and controversies, as reported on by The New York Times, the overall goal of organizers has more than been achieved. All over the world, people come together each year to raise awareness of violence against women, women's rights, immigration reform, healthcare reform, reproductive rights, the environment, LGBTQ rights, racial equality, freedom of religion, workers' rights, and tolerance. And you can be a part of it with your child. The simple message of "Women's rights are human rights" is one everyone can understand, no matter their age. Here's to showing up for what's right and helping raise awareness for a better more equal world, a world your child will inherit.