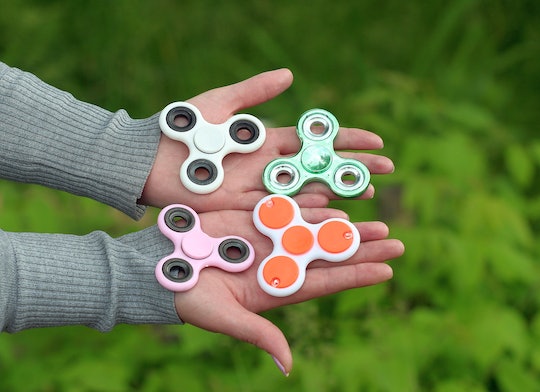 A consumer protection group this week issued a report urging parents to be on the lookout for two fidget spinners it says could be toxic to children. According to the Washington Post, the U.S. Public Interest Research Group (U.S. PIRG) Education Fund found dangerously high levels of lead in two fidget spinners sold at Target. Lab tests conducted for the PIRG found that the items — Fidget Wild Premium Spinner Brass and Fidget Wild Premium Spinner Metal — contained up to 330 times the federal legal limit for lead in children’s products, the Post reported.

The group has called on Target and toy manufacturer Bulls I Toys to pull the fidget spinners from store shelves and issue a full recall. But the report has sparked a debate over whether the popular, palm-sized gadgets should be regulated under the safety guidelines set for children's products or those set for products intended for general use.

In an email, a spokesperson for Bulls I Toys tells Romper that “safety is a top priority” for the company. “All of our product[s] are tested and comply with [Consumer Product Safety Commission] safety standards,” he added.

Target spokesperson Jenna Reck tells Romper via email that "Target is committed to providing high quality and safe products to our guests," and that the retail giant "closely review[s] all product safety claims that are brought to our attention."

But in a statement published by the Washington Post, a Target spokesperson appeared to argue that the fidget spinners weren’t a danger for kids because they weren’t meant for children anyway.

Kids helped to make fidget spinners one of the most popular gadgets of the year, but are they technically considered “toys?”

The federal legal limit for lead in toys is 100 parts per million (ppm), according to the PIRG consumer alert. The group’s lab test confirmed that areas on the two products had anywhere between five and 330 times the legal limit.

On its website, PIRG said that it sent testers to five Target stores around the country, and in each case the items were found in the toy department. And one of the products, the Fidget Wild Spinner Premium Brass, is currently being sold on the Target.com website. In the product description, the company said that while “framed as a toy, the fidget spinner is also a great stress-relief tool or place to exert excess energy,” adding further down that the manufacturer intends the product for customers “14 and older.”

Speaking to the Post, U.S. PIRG director Kara Cook-Schultz said that explanation made little sense considering how parents and kids view fidget spinners. “Saying fidget spinners aren’t toys defies common sense, as millions of parents whose kids play with spinners can tell you,” she said. On its website, the watchdog group wrote that parents and kids were far more likely to see fidget spinners as items meant for elementary- and middle-school-age children.

The Centers for Disease Control and other health advocacy groups have asserted in recent years that there is no allowable level of lead that is safe for kids. According to the Green and Healthy Homes Initiative website, exposure to even the tiniest amounts of lead dust — as little as three grains of sugar — can cause “significant and irreversible” brain damage in children, as well as a number of other health problems.

U.S. PIRG is calling on Target and Bulls I Toys to issue a full recall on the fidget spinners, according to a Fortune magazine report. In addition, the consumer alert published on the group’s website urges parents to sign a petition asking Target to remove the fidget spinners from store shelves and offer refunds to parents who might have purchased the products in stores or online.