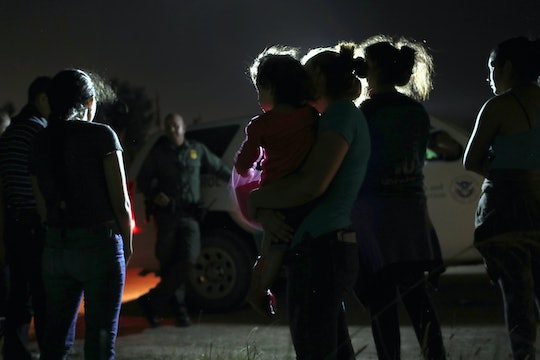 Some Immigrant Families May Soon Be Reunited, But The Fight Isn't Over

After crossing into the United States at the southern border with their children in 2018, many immigrant parents were deported, leaving their kids in U.S. custody. This weekend, however, a reported 29 immigrant parents separated from their children after they were sent back to their home countries are asking to be reunited, according to NBC News. The group — who are among 430 parents separated from their children and deported under the Trump administration — reportedly turned to the border with immigration lawyers, religious leaders, and supporters in tow, the news outlet stated, but their fight is far from over.

The families were forced to leave 27 children in U.S. custody, according to The Hill. The youngest of them, NBC News reported, is 5 years old. Some of the 29 immigrant parents have been separated from their children for close to a year, while the longest separation has been 14 months, members of an unnamed private organization representing the parents told NBC News.

Immigration organizations Al Otro Lado, Families Belong Together, and Together Rising told the news outlet some of the children have been sent to live with foster families or relatives living in the U.S., while others remain in detention centers.

Attorneys for the 29 deported parents told ABC News that when they arrived, they were initially told by Customs and Border Protection (CBP) agents they were at capacity and could not process them. Undeterred, they waited 10 hours, according to the news outlet, before they were taken to present documents to agents and gather information about the whereabouts of their children. On Sunday, TIME reported that after 12 hours of deliberation, CBP allowed them to enter the United States to await asylum hearings with their kids.

At least a few of the deported parents who returned to the U.S. this weekend intend to file new applications to seek asylum in addition to reuniting with their children, according to ABC News. Under President Donald Trump's "zero-tolerance" policy, imposed in 2018, immigrants who have been deported generally cannot reapply for asylum inside the U.S., according to TIME. As such, the news outlet reported that their petition at the border was widely viewed as a "last-ditch effort" to see their children again.

While Erika Pinheiro, litigation and policy director for Al Otro Lado, called their return a "huge victory," she acknowledged in a statement to ABC News that the fight ahead will be long and difficult:

This is a huge victory for these families, but this fight isn't over until they're reunited with their kids. These parents are now going into the black hole of CBP custody. Some could be separated again. Some could go into ICE [Immigration and Customs Enforcement] custody... But, we hope CBP and ICE do the right thing and immediately release these parents and reunite them with their kids. If they don't, we're ready to keep fighting for these families.

According to CNN, the U.S. government has identified 2,816 children separated from their parents at the border in 2018. Among them, 2,735 have been reunited with a parent, placed with a sponsor, or turned 18, according to a legal document filed by the Department of Homeland Security and other agencies, as CNN reported, which noted that the figures only account for children separated on or after June 26, 2018, when a California federal judge ordered the Trump administration to stop family separations.

Despite this hopeful development for these parents, it's clear there's still a lot of work to be done. According to a report from The Texas Civil Rights Project, uncovered last month found that dozens of parents and legal guardians were still separated from their children after President Trump signed an order ending his administration's policy of separating families at the border, as NBC News reported.

Advocacy groups like RAICES have tweeted their support, and are urging the public to join in, demanding that CBP reunite the 29 immigrant parents — and others who did not participate in the confrontation over the weekend — with their children.

Politicians have also spoken out, such as Congressman Dr. Raul Ruiz, who said, "As a father, I am outraged that this Administration is prolonging the separation of families. We need to stop the trauma now. Children should be with their parents."

While it's difficult to watch atrocities like this unfold, there are ways to get involved. You can donate to organizations like Al Otro Lado and The Florence Project, that help children who have been separated from their parents, or give to the ACLU, which challenges human rights violations as they arise .If you can't decide which organization to give to, The Guardian suggested in a report that you give to ActBlue, which will split any donation you make equally between 14 such organizations. You can also simply call your representatives, and urge them to vote against legislation that's harmful to immigrants. Remember, it only takes one small act to make a change.

More Like This
Can States Ban The Abortion Pill? FDA Rules May Make That Hard
Taraji P. Henson Says “Guns Have More Rights Than A Woman” At The 2022 BET Awards
Here’s How To Fight For Abortion Rights
Obamas Issue Powerful Statements After Supreme Court Ends Roe v. Wade