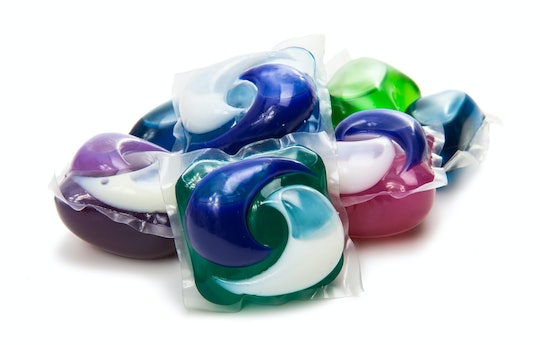 Someone Made An Edible Tide Pods Recipe, But... Why?

Tide Pods are kind of amazing. After decades of struggling with heavy bottles, measuring cups, and that weird feeling where your hands never seem to rinse clean after getting liquid detergent on them, our laundry routines were revolutionized by the candy-colored packets of soap. But some people find the candy resemblance a bit too strong, and though they know it's wrong, they can't help wanting to eat the household products. If you suffer from intrusive solvent-munching thoughts, your prayers have finally been answered, because someone made an edible Tide Pods recipe, and unlike the real thing, this one sounds delicious and nontoxic, which is something you should always look for in a snack.

Consumer Reports has been warning the public about the dangers of ingesting laundry detergent capsules since Tide Pods were introduced in 2012. During the product's first year on the market, poison-control centers received nearly 7,700 reports of "pod-related exposures" to children 5 and under. Parent company Proctor & Gamble has redesigned Tide Pods' packaging nearly every year since the product's debut in order to keep the tasty-looking but potentially lethal detergent out of the hands of young children. But that doesn't do anything for adults who know full well that soap isn't food, yet can't help but be drawn to them.

The urge to eat Tide Pods (even though you never really would) has long been documented on Twitter, with several users even going so far as to harass the Fruit Gushers social media manager about the possibility of creating a safe-to-eat crossover. It seems as though, much like "fetch," Gushers Pods are not going to happen, but one generous soul has a solution, if you don't mind a little work, a good amount of waiting, and a lot of gelatin (sorry, vegans).

Tumblr user Rolan cautions that they haven't actually tested their "Hypothetical edible tide pods recipe," but it seems legit, so maybe give it a try. What do you have to lose, besides a couple of hours, about ten bucks, and maybe your self respect? For materials, you'll need parchment paper, a brownie pan, an ice cube tray, and a silicone candy mold for the crescent-shaped swirls on top. Don't cheap out here; we're going for realism. Then, grab the following ingredients:

The first step is to make the "plastic" coating for your pods, which is done by combining 2 packets of Knox gelatin with 6 tablespoons of boiling water, and adding a flavoring agent, if desired. Pour that onto a parchment-covered brownie pan and refrigerate. Make the orange and blue swirls by following the directions on the Jell-O packages and pour them into your candy molds. Then, go to bed and dream about burping bubbles.

The next day, you'll make the white part of your pods by mixing the sweetened condensed milk with 1 cup boiling water. In a separate bowl, sprinkle 2 packets of Knox gelatin over one-half cup cold water, let stand for a few minutes, then add one-half cup boiling water to dissolve. Combine both mixtures and cool to room temperature.

To assemble your pods, cut your "plastic" into squares and tuck them into the recesses of your ice cube tray. Partially fill them with the white mixture, then cover with another sheet of "plastic." Use a hair dryer to gently melt the layers together, then top each with a blue swirl, an orange swirl, and finally, a third sheet of "plastic." Melt closed, and refrigerate overnight again. In the morning, draw your curtains closed, pour your pods into a cereal bowl, and indulge in your shameful treat. Never speak of it again.