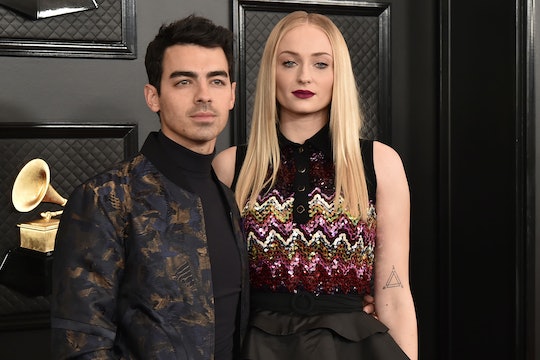 Roughly nine months after tying the knot in a surprise ceremony in Las Vegas, Sophie Turner and Joe Jonas are reportedly expecting their first child together, according to reports from Just Jared and Us Weekly. While Romper's request for comment from Turner's reps regarding the reports was not immediately returned, multiple sources close to the couple have reportedly confirmed that the 23-year-old Game of Thrones star is pregnant, but is keeping it quiet apart from close friends and family.

"The couple is keeping things very hush hush but their friends and family are super excited for them," one unnamed source told Just Jared. A second source told the entertainment news outlet that Turner is already looking into modifying her wardrobe as her pregnancy causes her body to change. "Sophie has decidedly been choosing outfits to wear on and off the carpet to accommodate her changing body," the source reportedly told Just Jared.

Us Weekly and E! have also confirmed reports of Turner's pregnancy shortly after the news broke.

Turner and Jonas were legally married in early May in a surprise ceremony held after the Billboard Music Awards, CNN reported. In typical Las Vegas fashion, an Elvis impersonator officiated their wedding, which was livestreamed on Instagram by DJ Diplo.

The couple later held a larger, more traditional wedding ceremony and reception for friends and family at Château de Torreau in Sarrians, France in late June, according to Elle.

Reports of Jonas and Turner's pregnancy appear to line up with what a source close to the couple told Hollywood Life in July about when the pair planned to start growing their family. "All of Sophie’s immediate work is complete but she is looking to hit the ground running now that Game of Thrones is over," Hollywood Life reported their source said. "She wants to get a few more acting gigs before she starts a family. As for Joe, he is on tour with his brothers and he is interested in starting a family after the tour."

According to Hollywood Life's source, Turner and Jonas saw early 2020 as a good time to begin having children. "They both think it would be really cool to start early next year and the thought hasn't escaped them that they could start and try to get pregnant when the [Jonas Brothers] tour ends [in early March 2020]."

Neither Turner nor Jonas have yet to comment publicly on news that they're expecting.

More Like This
Post Malone Just Revealed He's Welcomed His First Child AND He's Engaged!
Janet Jackson's Son Eissa Is A Little Musical Prodigy In The Making
Princess Charlotte Got So Excited To Shake A Royal Fan's Hand
Prince George Hosted A “Little Cake Sale” For One Of His Dad's Favorite Charities