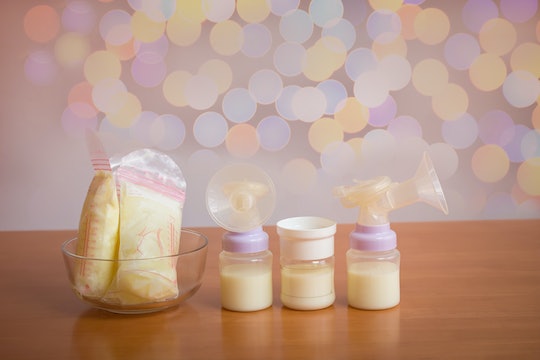 Strangers Gave The Sweetest Gift To This Mom Who Couldn't Breastfeed

When you're pregnant, or have just given birth, the pressure to breastfeed is real. There are obvious benefits to nursing versus going straight to formula, but there's no right answer. Still, many moms are wistful about being able to breastfeed their babies one day, and are disappointed when they can't for one reason or another. For Lauren Miller, whom TODAY reported learned she had cancer after giving birth to her second child, that was the reality. Fortunately for her, the public caught wind of her story and rallied around her. Strangers gave the sweetest gift to the 'heartbroken' mom who couldn't breastfeed, and it'll restore your faith in humanity.

Miller first started experiencing symptoms early in her pregnancy, she told KOLD. Doctors were quick to dismiss her aches and pains as normal, despite the severity. Miller said she "had no idea" about cancer until after she gave birth and learned she had Philadelphia Positive Acute Lymphoblastic Leukemia, KOLD reported. Following her diagnosis, Miller had to return to the hospital and start chemotherapy. This meant she couldn't continue breastfeeding her daughter Scarlett, which Miller said was "really hard."

Her sister posted about Miller's heartbreak on Facebook, and it caught the eye of Kayla Miller, also a new mom according to the news outlet. She decided she had to do something to help Miller achieve her dream of breastfeeding for the full first year of Scarlett's life. "It was easy for me to just pump a little bit extra and it was well worth it," Randall told KOLD. Other moms from across Miller's home state of Arizona got in on the action, pumping more milk than necessary to help a complete stranger and her baby.

"They were like 'oh you need some? I have some extra, here it is,'" Randall told KOLD.

The donations started rolling in around December, TODAY reported. Randall meets all milk donors in public places. She told TODAY she currently has about 30 regulars who donate to the cause, adding that "There is a lot of trust involved." Randall said that so far, Scarlett hasn't had any bad reactions to the donated milk. She and Miller have since become close friends, and Miller said she can't help but smile when her gal pal pops by with her monthly milk delivery.

"It just shows you how moms take care of each other and how we come through for one another," she told TODAY. "I have no words to describe what it means to me. They have brought me so much comfort. Scarlett is getting what I hoped to give her, but couldn't."

While Miller relies on Randall and her vetting system, there are plenty of ways for any breastfeeding mom to donate breastmilk. According to La Leche League International, the first milk bank in America was founded in Boston way back in 1911. The concept thrived until the '80s, amid fears of HIV which scared many people away from accepting donated breastmilk for their babies.

Miller's story is a reminder that just because you yourself can't breastfeed your baby, doesn't mean they can't still get all that goodness from someone else. There are plenty of options out there, if only you look.

More Like This
6 Ways To Fix A Shallow Latch So Your Baby Can Nurse Properly
Here’s How A NICU Stay Can Affect Breastfeeding
Is It Safe to Take Ibuprofen While Breastfeeding?
Breastfeeding Twins: Everything You Need To Know