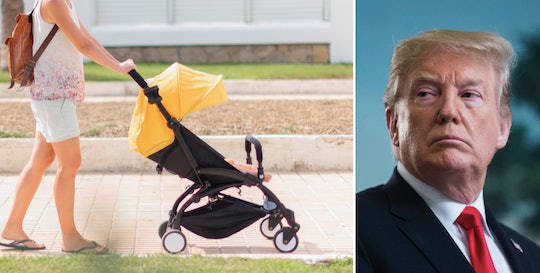 Stroller Prices Could Go Up 20% Thanks To Trump's Proposed Tariffs

President Donald Trump's trade war with China has likely caused many people a good deal of panic. Retail businesses and manufacturers, certainly, but there's also everyone who buy things. The potential backlash from this trade war will be felt in some very big ways, but also in some smaller ways that maybe people wouldn't expect. For instance, stroller prices could rise, about 20 percent, thanks to Trump's suggested tariffs, and this could become a serious problem for parents who might already be struggling to make ends meet.

More than 600 companies have signed a letter to Trump urging him to avoid going into a trade war with China by imposing tariffs that could greatly harm their businesses, according to CNN. The letter, which was signed by executives from companies like Walmart, Costco, Gap, Levi Strauss, and more, recognized the administration's "efforts to address unfair trading practices, including intellectual property violations, forced technology transfer and more."

That being said, hundreds of companies are seriously concerned about the fallout for all Americans. "We know firsthand that the additional tariffs will have a significant, negative, and long-term impact on American businesses, farmers, families, and the US economy," the companies wrote in the letter on June 13. "An escalated trade war is not in the country's best interest, and both sides will lose."

One of the potential difficulties American parents could face if Trump's proposed tariffs come into effect would be the price of strollers. Evenflo CEO Jon Chamberlain told CNBC on Tuesday that the company was looking for some form of "relief" on stroller tariffs.

"We're looking for some relief on strollers," he told the news outlet. "You’re looking at a 25 percent tariff as is proposed right now. So those are on component parts and sometimes on the full product itself. So you’d be looking at high double digits, the 15 percent to 20 percent range."

If relief doesn't come, strollers could be about 20 percent more expensive. And considering strollers are already one of the most expensive items parents buy when they welcome a new baby, this is pretty bad news across the board.

It isn't simply the added cost that could affect parents' stroller purchases either. If President Trump's proposed tariffs come into effect, there could be other issues.

Strollers already run the gamut when it comes to pricing, as PopSugar reported, starting at a few hundred dollars and going all the way up to the thousands depending on quality and accessories. If parents are already feeling the pinch when purchasing a stroller, these new tariffs could see them searching for better deals online and finding a stroller that might not be as safe as one they would have chosen otherwise. This, obviously, could have devastating ramifications as well.

Joseph Shamie, President of Delta Children, told Romper in a statement that the company shares this concern, but it will "never make compromises when it comes to safety, even if it means losing business and market share to companies or brands who are not as safety conscious as we are."

Shamie said the company is concerned some "manufacturers will cut corners to offset the additional cost of tariffs and keep their products at current prices." He said, "They might do so by opting to use lesser quality materials (like cheaper metals) or less materials per unit (like stroller padding). This would both lessen the quality of the products while also making them less safe to use."

Additionally, Shamie shared that he's concerned other companies may move production abroad to "factories that do not have experience producing baby and children’s products that adhere to the newest safety standards" and, in turn, worries the products won't be properly tested.

"This price discrepancy will unfortunately result in many American parents opting for unsafe products over higher quality and properly tested products," Shamie cautions, adding that the company is concerned parents who are already struggling to make ends meet will be "forced to use hand-me-down products that do not meet the latest safety standards."

"Imposing tariffs would increase the price of new products enough to factor into parents’ decisions whether to buy new or use old," Shamie said. "These products may be missing warning labels or usage instructions and their quality may have been compromised during storage or re-assembly. Even slightly damaged strollers can pose a real threat to children if they have broken or sharp edges."

President Trump has yet to officially impose these new tariffs, although he continues to tout the potential trade war as a positive moment for the United States, as Real Clear Politics has reported.

But here's the thing: President Trump doesn't have to concern himself with the day-to-day living costs of being a parent. He doesn't have to be in the unenviable position of trying to save enough money to provide for his children. So perhaps he should think about that when he sits down for trade talks.