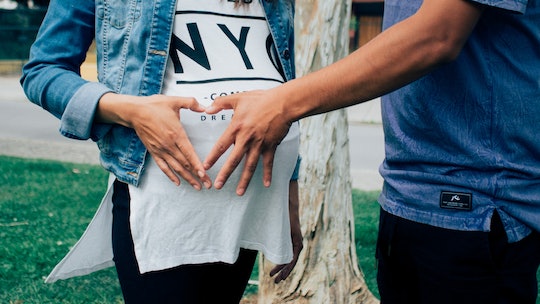 Teen Moms Are More At Risk For Heart Problems Later In Life, But It Could Be Prevented

Teenagers face many issues that older women don't when they get pregnant. And now there's one more to add to the list. According to a new study, teen moms might have a higher risk of heart problems later in life. The research, which was published in the Journal of American Heart Association, found that postmenopausal women who had their first kid before age 20 had a higher risk of cardiovascular disease than women who had children later on in life, or never at all.

The study examined data from the 2012 International Mobility in Aging Study, which focused on just over 1,000 women who were between the ages of 65 and 74 in Canada, Brazil, Colombia, and Albania. Researchers compared the women's Farmingham Risk Score — a gender-specific algorithm which measures the risk of heart disease — and found that women who had a kid under 20 had an overall higher risk of cardiovascular disease, even compared to women had multiple children.

This doesn't mean that teen moms are inherently less healthy later in life, but it does mean that women who had kids earlier in life, along with their doctors need, to make sure they're monitoring their health for cardiovascular issues. But that can be a problem, especially in the current socio-economic climate.

The study also found that teen moms were more likely to come from lower-income families, which means that they might also not have access to the consistent, quality health care that they might require.

JoAnn Manson, M.D., Dr.P.H., a professor of medicine and women’s health at Harvard Medical School and the chief of preventive medicine at Brigham and Women’s Hospital in Boston, told the Associated Press:

Having an adolescent birth often denies women the opportunity for education and career development, which may lead to greater stress and financial adversities.

Manson wasn't involved with the study, but added that adolescent birth needs to be further studied. Other factors, like smoking, diet, and psychosocial stressors could also have an effect on a woman's health over the years. So being a teen mom isn't exactly a cause of heart disease, at least not definitively.

Catherine Pirkle, Ph.D., an assistant professor in public health at the University of Hawaii at Manoa, said in a statement to the AP that the study's findings indicate that legislators and medical professionals need to better examine how society takes care of all mothers, despite their age. She explained:

Adolescent childbearing is generally viewed as undesirable, both in the U.S. and in most global settings. Our results simply reinforce that view at a moment in time when women’s reproductive rights are being eroded across the U.S., especially regarding access to contraception, which is so important to preventing adolescent pregnancy.

She told the Daily Mail, "If adolescent childbirth increases the risk of cardiovascular disease, then our findings reinforce the need to assure that girls and adolescents have sufficient sexual education and access to contraception to avoid adolescent childbearing in the first place." In addition to that, if teen childbirth is just one of many factors that lead to heart disease, it still means that government and health professionals need to better support young women and mothers.

Preventing teen pregnancies means helping women avoid economic and academic setbacks as well as avoiding health risks. In the United States, at least, women are at a much greater risk than they have been for a while. For instance, the Trump administration recently rolled back the Affordable Care Act mandate that required all employers to cover birth control, which means thousands of women might be stuck with paying the often prohibitive cost of birth control out of pocket.

In addition to that, the GOP's proposed health care bills this year have all cut funding for Medicaid, which low-income women depend on for their health care, including checkups that would spot heart disease or prenatal care to keep women healthy throughout their pregnancies. Luckily, those bills never made it to the president's desk, but everyone's health care is at risk of becoming less affordable as long as the GOP stays on this course.

It's a shame that these proposed health care policies knowingly put women at risk, especially since teen pregnancy — and health issues that stem from it — could be totally preventable.