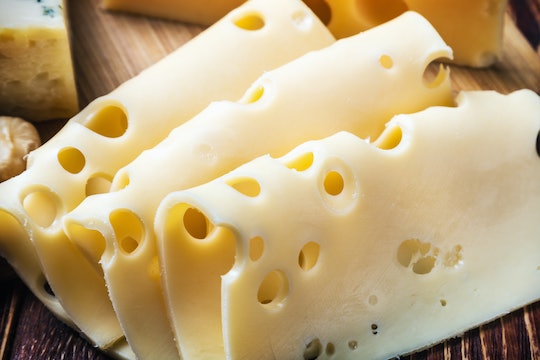 Is it just me, or is 2018 officially the year of bizarrely-flavored frozen treats? Because it seems like every time I turn around, the release of yet another eccentric slushie or ice cream flavor is blowing minds across the country. First, there was the pickle juice slush from Sonic. And then it came to light that mayonnaise ice cream is actually a thing. Most recently, though, according to Hello Giggles, the nation has learned that Swiss cheese ice cream will soon be a thing you can try, but only for a limited time.

So here's the scoop. (See what I did there?) According to Gothamist, in honor of Murray’s Cheese in New York City celebrating the birthday of one of its Swiss-esque cheeses called Annelies, the cheese shop is teaming up with Oddfellows Ice Cream Co. to offer an Annelies-flavored ice cream. The reason this is so special, according to Gothamist, probably has a lot to do with the time and energy put into creating this raw cow's milk cheese from Switzerland's Appenzell valley. See, before Walter Rass — the cheesemaker responsible for Annelies — this cheese was only sold in his home village, according to Gothamist. But, Rass partnered with Murray's in 2016, and he now sends over 3-month-old wheels to New York City to allow the cheese experts there age them for another nine months.

The resulting cheese is only sold by Murray's in New York City, as Gothamist reported. (Fun fact: The name Annelies was actually inspired by Rass' wife's name.)

Naturally, in honor of this cheese's two-year anniversary with Murray's Cheese, the company is celebrating with cheese-flavored ice cream. If you're like me, your initial reaction is probably along the lines of, "Hmm, I'm not so sure." Then again, they're both dairy — and I definitely love ice cream and cheese on their own. So maybe Murray's is onto something here... who knows?

According to Hello Giggles, the company describes Annelies as having "sweet flavors of roasted hazelnuts and vibrant alpine grasses, with lush undertones of butterscotch and cocoa." Which if you take out "vibrant alpine grasses," doesn't sound too bad as an ice cream to me. I'm definitely intrigued.

Unfortunately, though, it doesn't look like I'll get an opportunity to try the Swiss cheese ice cream for myself. That's because MyRecipes.com reported the Annelies ice cream will be available only at New York City Oddfellows locations from Aug. 2 through Aug. 5. So if you happen to be in the area and up for a little adventure, you can stop by any NYC location to test out a scoop for $5. You can also try a free sample on Aug. 2 at Oddfellows' Bleecker Street and Grand Central Market locations, according to MyRecipes.com.

Although news of the Annelies ice cream is still fresh, initial reactions don't seem impressed with the idea. One Twitter user wrote, "Just throw the whole planet away."

Still, some are willing to give it a chance. Another person tweeted, "I never knew I needed cheese ice cream, but yes...please... "

If you're not completely sold on the concept of a cheese-flavored ice cream, consider this: It has to be better than mayonnaise ice cream, right? Because apparently, an ice cream shop in Falkirk, Scotland — called Ice — sells mayonnaise ice cream, among other kooky options like Monster Energy Drink, The Washington Post reported. And the internet was seriously distressed by this revelation. This was evident by the mass rejection of the unconventional flavor via Twitter last week.

I wonder what's next on the horizon of weird ice cream flavors? Thanksgiving is coming up in a few months — perhaps someone will come up with a turkey-flavored option? Green bean casserole? Mashed potatoes and gravy? Who knows.

As for me, I think I'm perfectly OK over here with my pint of Ben & Jerry's half baked ice cream. Because brownies and cookie dough = awesome ice cream. Pickles, mayo, and cheese, on the other hand, just sound like ingredients for a hamburger to me.

More Like This
This Is Not A Drill: TWIX Is Releasing A New Cookie Dough Flavor
What To Know About Trader Joe's Hours On Fourth Of July
Dunkin’s New Summer Menu Is Here At Last
Can The Baby Have That?