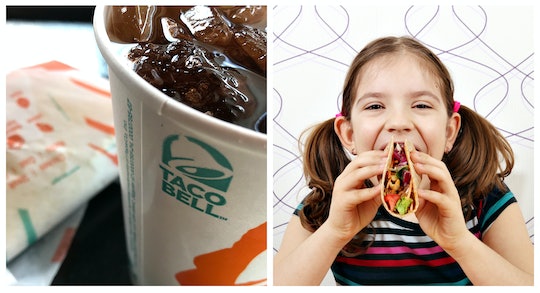 It seems like wireless carriers will do just about anything to lure customers away from their competition. But one carrier has seriously upped its game with a mouth-watering perk — Taco Bell and T-Mobile's partnership means free tacos for subscribers, as announced during Super Bowl LIII.

On Sunday, Feb. 3, T-Mobile revealed the sweet deal through one of its Super Bowl commercials, The Verge reported. The ad showed a text exchange between a T-Mobile customer and his "bae" trying to figure out what they should have for dinner. "What should we get for dinner?" Kristi texts. The unnamed T-Mobile customer then types several passive-aggressive responses that he keeps erasing — such as, "Tacos sound good ... TO ME", "You should have a girls night!!! because then I could eat tacos...", and "WHY IS IT UP TO ME BUT REALLY UP TO YOU???" (Hmm. This conversation sounds pretty familiar to me.) Finally, he actually sends, "Whatever you want bae," to which Kristi replies, "Sushi??"

The ad finishes with the message "GET WHAT YOU WANT. FREE TACOS EVERY WEEK."

Yes, you read that correctly. Every Tuesday for a limited time, T-Mobile customers can take advantage of free tacos.

"Paying nothing for tacos? Nothing's better," Taco Bell's website reads. "So, in the taco collab for the ages, Taco Bell and T-Mobile Tuesdays have joined forces to give you a FREE Seasoned Beef Crunchy or Soft Taco* - order online. Want in on this deal? Download the T-Mobile Tuesdays app today."

All customers have to do is download the app, register, and viola!

T-Mobile spread the good news by sharing the ad on Twitter, along with the message, "What is everyone eating next Tuesday?!" with each word separated by a taco emoji. (Because of course.)

The wireless carrier's Twitter account didn't waste any time commenting on its own tweet, writing, "@TacoBell Please accept this taco as a symbol of our friendship – it’s a friendship taco. #AreYouWithUs." LOL. Awww.

As you can imagine, Twitter was all for free tacos. One Twitter user wrote, "Legit the best commercial I’ve seen so far on the #SuperBowlLlll."

Another Twitter user wrote, "I cant wait for Tuesday to get my free @tacobell tacos thanks @TMobile!"

Another Twitter user chimed in with a GIF Oprah repeatedly announcing, "You get a taco!"

This marks the first time the T-Mobile has used the Super Bowl to announce customer news, AdWeek reported. “When [Taco Bell CMO Marisa Thalberg] and I managed to get this deal put together, we were thinking about what’s the suitable platform to announce this pretty big bit of customer news, and we thought the Super Bowl was the ideal moment,” Nick Drake, T-mobile’s evp of marketing and experience, told AdWeek.

As someone who doesn't currently have T-Mobile as my wireless carrier, I have to say I'm extremely jealous of this free taco promotion. I mean, not that tacos are all that expensive anyway — and I'm not considering switching just for the free Taco Bell. But it's definitely an awesome perk for those who are already T-Mobile customers. And I'm sure they'll use their taco powers for good.