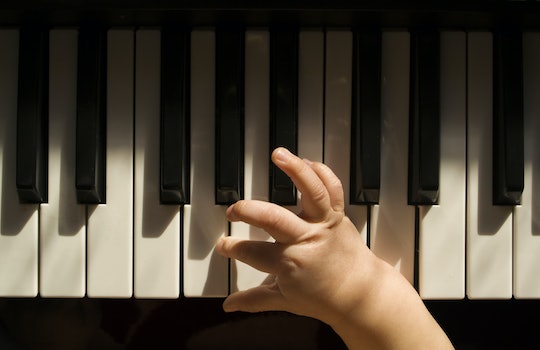 Wondering If Your Kid Should Take Piano Lessons? A New Study Suggests They Should At This Age

Cultivating an appreciation of music is one of those things I think more parents really try to encourage in their kids. There's something so elemental about the way we react to music, so natural, that parents might not even realize why they want their kids to become not just fans of music but also musicians themselves in some cases. It just sort of feels natural. But it seems there might be a scientific reason why your kids should be taking piano lessons at a certain age. A new study found that early piano lessons in particular tend to help specifically with language skills.

The study, which was published in the Proceedings of the National Academy of Sciences, aimed to look at the mental benefits of musical training for young children. There have been studies done in the past that have looked to the benefits of musical training for children, with one 2016 study linking musical training to better academic achievement, stronger math skills, and even improved movement and hearing, according to The Conversation. This recent study wanted to be slightly more specific by pinpointing a particular age when it would be most beneficial for children to start learning to play the piano.

As study co-author John Gabrieli, a cognitive neuroscientist at the Massachusetts Institute of Technology’s McGovern Institute for Brain Research, explained to TIME that the function of the study was to discover the way piano lessons could help young children with their language skills:

There’s evidence that early exposure to piano practice enhances the processing of sounds that extend not only from music, but also into language.

According to Gabrieli, as TIME reported, when young children are taught to be able to decipher different notes and pitches from the piano, this helps them to pick up on small differences in the way words are spoken.

To get a sense of exactly how piano lessons might help language skill development in young children, researchers from MIT looked at 45 Mandarin-speaking Chinese children between the ages of 4 and 5 years old, according to the study. These children were divided into three groups: one group was given 45 minutes of reading instruction, another was given 45 minutes of piano lessons, and the final group just got to hang out for that period of time.

At the end of six months, according to MIT News, the three groups didn't really have any noticeable difference in their cognitive ability save one: the kids who took piano lessons were far better at being able to pick up on subtle differences in the spoken word. Even to the point where they could hear the difference between similar consonants like "T" and "D," according to study author Robert Desimone. As he explained to MIT News:

The children didn’t differ in the more broad cognitive measures, but they did show some improvements in word discrimination, particularly for consonants. The piano group showed the best improvement there.

It's important to note that the study was done with children who spoke Mandarin primarily, a language that can be difficult to understand as it has so many subtle yet significant differences in tone, according to the Los Angeles Times. How incredible is it to think that something as wonderful and enjoyable as offering your kids the chance to take piano lessons when they're just 4 or 5 can help their language skills throughout their life?

Clearly it was significant enough to the school in Beijing where the study took place. As a result of this study, the school has continued to offer piano lessons to their young students, according to MIT News. Because really, how can learning to play a musical instrument ever be wrong?

More Like This
The Covid Vaccine For Kids Under 5 Has Been Sent To The FDA For Review
How To Explain Juneteenth To Your Kids — With Joy & Truth
WowWee’s New Fairy Finders Will Keep Kids Distracted For Hours
Princess Charlotte Is Ready To Be A Soccer Star, Too