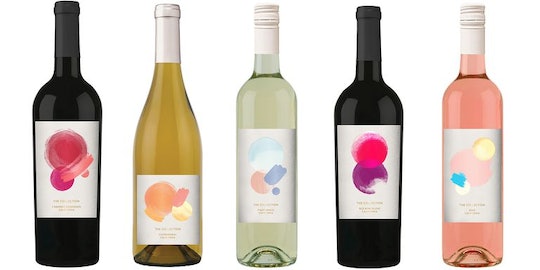 If you're like countless others out there, Target is like the sun at the center of your universe: The source of all life, without which your family's basic needs (from clothing to food to shelter, in the form of furniture and bedding and appliances) would surely go unmet. No need to frequent a dozen different retailers on the regular; in fact, you don't even have to hit up the liquor store anymore, thanks to the retailer's sizable selection of vino... including Target's new line of wines under $10, called The Collection.

As you're no doubt aware, Target is already well established as a leader in the extremely-affordable-but-still-actually-good wine market; their California Roots line of $5 bottles debuted in September of 2017 to the delight of wine drinkers on a budget. Much like Trader Joe's Two-Buck Chuck (a wine rack staple for millions since 2002, as Bustle reported), California Roots was an instant hit... and it's safe to say that The Collection will be, too.

Slated to arrive in stores on March 3, The Collection includes five classic wine varieties: Pinot Grigio, Cabernet Sauvignon, Chardonnay, Rosé (of course), and Red Wine Blend, according to a press release. Technically, these are a little bit pricier than the California Roots wines (at $10 instead of $5), but they still fall into the category of "ridiculously affordable wine," so the price jump is no big deal. Plus, The Collection wine bottles practically double as home decor, with labels designed by Target’s in-house design team, as The Kitchn reported, "to reflect the beauty of wine making."

This bottle is indeed a beauty:

The Rosé is described as having hints of "white summer flowers and red roses" which "give way to strawberries and watermelon" for a "crisp," refreshing flavor.

Towards the other end of the flavor spectrum, this Red Wine Blend has notes of "mocha, caramel, blackberry, and dark chocolate"... yeah, I'm sold.

At this point you've probably already put a big red circle around March 3 on your calendar, but there's even more good alcoholic beverage-related news from Target to share.

Target is also coming out with an even more convenient version of its hugely popular boxed wine: Two varieties of "Wine Cube" (in Bubbles Rosé and Bubbles White Wine), each of which comes with four cans of sparkling wine (for $11 per pack).

As far away as picnic season might seem right now, these cubes will make the perfect addition to your cooler this summer. Speaking of which, yet another new alcoholic offering from Target is also likely to show up at many a warm weather get-together: Remember California Roots? The line is adding a seventh varietal, Sauvignon Blanc; like all the others in the collection, it's just five bucks.

But wait... there's more! No, for real. Well, not more wine, exactly, but more low-priced booze: Target is now going to be selling Crook & Marker spiked seltzers, which, if you're into the spiked seltzer thing, sound pretty great: They're available in seven flavors including Blackberry-Lime and Grapefruit, they're sugar-free, and they're only 80 calories (four-packs are $9; eight-packs are $17).

Now, here comes the caveat: Of course not every Target location will be selling the above items, because not every Target location carries alcohol. That said, Target’s adult beverage business has been the "fastest-growing division in the Food and Beverage department," according to a press release, and Target says they're working towards carrying alcohol in almost 90 percent of stores by the end of 2019.

So don't lose hope, even if you would currently need to cross state lines in order to get your very own Wine Cube. If Target's plan succeeds, no wine-loving mom will be left out of this low-priced revolution.