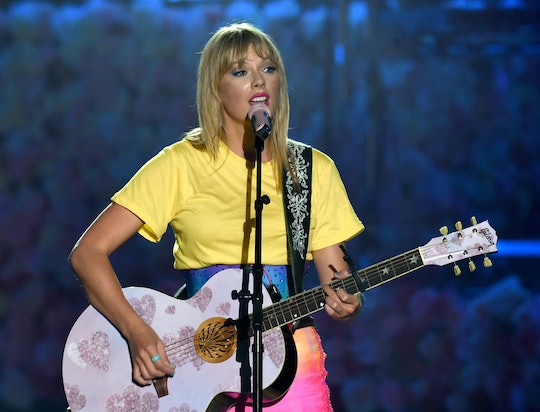 Taylor Swift Finally Gets Political In Open Letter & It's So Powerful

Taylor Swift has been criticized for declining to get political in the past, but she's finally ready to take a stand. The "ME!" singer spoke out in support of Democratic nominees during the midterm elections in October 2018, as reported by Entertainment Weekly, but hasn't had much to say otherwise — at least until now. With Pride Month in full swing and the Equality Act, which bars discrimination on the basis of sexual identity, facing rejection in the Republican-controlled Senate, the pop star made her voice heard with an open letter. Swift's open letter on the Equality Act called out the Trump administration in a major way.

Swift, 29, penned the letter and shared it on Twitter. In it, she said she rejected "the President's stance that his administration, 'supports equal treatment of all,'" noting that he and his supporters simultaneously, and regularly, undermine the Equality Act. She wrote that Trump said the bill, as it is now, is full of "'poison pills that threaten to undermine parental and conscience rights.'" Swift said that it is impossible to support a community "while condemning it in the next breath."

"That statement implied that there is something morally wrong with being anything other than heterosexual and cisgender, which is an incredibly harmful message to send to a nation full of healthy and loving families with same-sex, non-binary or transgender parents, son or daughters," the Grammy Award-winning singer wrote.

Swift also created a Change.org petition that would "urge the Senate to support the Equality Act." GLAAD confirmed that she made a "very generous donation in honor of LGBTQ Pride month," as well, according to Entertainment Weekly.

Trump continues to show support for the LGBT community, at least online. On Friday, ahead of the first day of Pride Month, BuzzFeed News noted that he tweeted about the "outstanding contributions LGBT people have made to our great Nation." Trump, 72, also talked about "the many LGBT people who live in dozens of countries worldwide that punish, imprison, or even execute" people based on their sexual orientation, touting an initiative by his administration to "decriminalize homosexuality" worldwide. Trump faced backlash from Twitter users over the message, with commenters noting that his actions haven't matched the message.

The Equality Act, passed in the house on May 17, would serve as an amendment to the Civil Rights Act of 1964, The New York Times reported. It prohibits discrimination in public and private sectors based on sexual orientation and gender identity. The bill breezed through the House, currently controlled by a Democratic majority, but must make it through the Senate before becoming law. The issue, as noted by the newspaper, is that Republican senators and Trump himself have been outspoken in their disapproval of the bill.

A senior official linked to the Trump administration told NBC News in a statement Trump and his team are "absolutely" opposed to discrimination of any kind, but do not support the Equality Act. The official said the bill "is filled with poison pills that threaten to undermine parental and conscience rights," which Swift quoted in her letter.

Swift's open letter is refreshing to see. It's important that people in positions of power speak up and be heard, as sometimes politicians ignore the voices of the masses. It's not often that she speaks on political matters, but her recent stance is both welcome, and necessary.

More Like This
Chris Evans Has Choice Words For Critics Of The Same-Sex Kiss In 'Lightyear'
Obamas Issue Powerful Statements After Supreme Court Ends Roe v. Wade
This Map Illustrates Just How Many States Would Ban Abortion If Roe V. Wade Is Overturned
6 Takeaways From The White House’s First-Ever Parents Press Conference