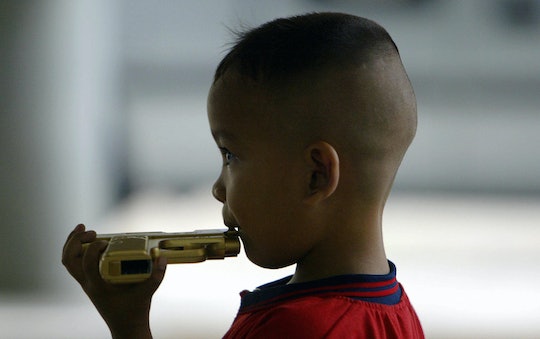 On Tuesday — less than 48 hours after the deadliest mass shooting the United States has ever seen sparked another conversation about gun control — the House of Representatives will vote on yet another attempt to ban abortion past 20 weeks. The timing of the House voting on the Pain-Capable Unborn Child Protection Act, of course, makes it far too easy to point out a truth most people will find uncomfortable: if passed, the abortion ban would make abortion more illegal than leaving your gun unsecured and it resulting in a child shooting someone.

The Pain-Capable Unborn Child Protection Act would ban any abortions past 20 weeks' gestation except in cases of rape, incest, or a risk to the mother's life. Doctors who performed abortions on moms whose pregnancies had advanced past 20 weeks could face up to five years in prison. And while mothers wouldn't be penalized for seeking out abortions, the punishment to women is still loud and clear: they would lose their ability to control their reproductive rights.

Essentially, the politicians backing this bill believe that if a woman has the audacity of becoming pregnant, she must live with the consequences — growing a human inside of her, paying for maternal and neonatal health care, and raising a child or giving it up for adoption (so it can be supported by taxpayers).

Different versions of this bill have arisen, in one form or another, over and over in the past few years, including in 2013 and 2015. It is the zombie abortion bill that will not die, and the fact that it has come back to haunt us in 2017 — now with the backing of the current administration — should be no surprise. However, despite all their passion for the unborn, it's worth noting that many GOP politicians have decidedly not pursued bills that would punish gun owners whose negligence in leaving their weapons unsecured results in their children accidentally shooting someone.

According to Slate, only 28 states have "child access prevention" laws (which punish parents who unintentionally give kids access to their guns) and there is no federal child access prevention law, despite the fact that gun owner negligence lies behind the deaths of more than 300 kids and the injury of another 3,000 annually, according to estimates. And despite the fact that CAP laws have been effective in reducing states' accidental shootings and child suicide rates, even the states that do have CAP laws often don't enforce them. After all, the laws can be vague and vary widely from state to state — and who wants to add insult to injury by laying criminal blame on a parent mourning the loss of a child or feeling guilty that their child shot someone?

Instead of working on an effective, consistent solution to keep more (grown, non-fetal) American children alive across the United States, it seems like the GOP would rather invest its efforts in punishing women for having sexual and reproductive autonomy. Women who become pregnant are and doctors who make informed medical decisions with these women are seen as more irresponsible — and more deserving of punishment — than people who leave their weapons unattended and unlocked around children.

The House of Representatives will vote on the Pain-Capable Unborn Child Protection Act on Tuesday, and the bill is expected to pass, thanks to the Republican majority in the House. Women could be one step closer to losing their right to control their bodies by the end of the day, and the representatives behind that choice will applaud their hard work and dedication over the years.

When it comes to the next shooting in which children are harmed, however, don't expect the same dogged persistence from those representatives. Instead, expect to hear many thoughts and prayers for them, with no bills passed and no votes in favor of laws that would help make an actual difference in stopping similar deaths.