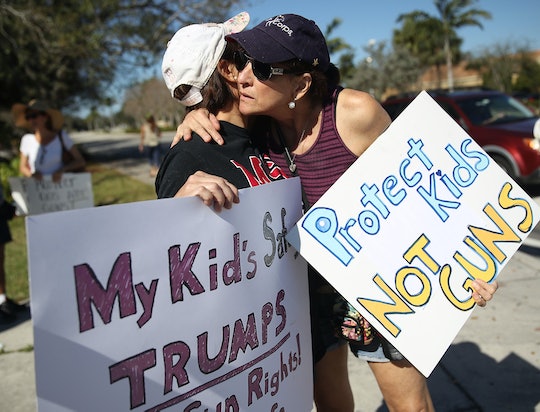 A 19-year-old walked into a high school on Valentine's Day with a semi-automatic assault rifle. It sounds like the start to some sick joke, right? Unfortunately, the punchline is both devastating — a total of 17 students and teachers were killed — and very real. Because this exact scenario unfolded on Feb. 14 in Parkland, Florida. And the solution to mass school shootings, according to some politicians (including President Donald Trump,) is to simply give teachers guns. In direct response to this suggestion, the #ArmMeWith hashtag shows what teachers *really* need to help their students.

So let's just back it up and take a moment to fully grasp what the POTUS recommended in front of the Conservative Political Action Conference (CPAC) on Friday. Apparently, he wants to solve the gun violence problem in schools by bringing more guns into schools. Yes, this is seriously what President Trump thinks will do the job once and for all. "In my opinion, you won't have these shootings because these people are cowards," he said, according to The Guardian. "They're not going to walk into a school if 20 percent of the teachers have guns — and maybe 10 percent, or maybe 40 percent. And what I'd recommend doing is people that do carry, we give them a bonus. We give them a little bit of a bonus."

You can probably imagine how the vast majority of teachers are feeling about this proposal. In fact, the hashtag #ArmMeWith practically emerged overnight, according to Time, in direct response to the idea of arming teachers. The idea behind the hashtag is this: Instead of putting guns in the hands of our educators — who, by the way, are already incredibly overworked and underpaid — maybe, just maybe we should give them the basic necessities they need for their classrooms instead. Many teachers took to Twitter to express things that would actually help them.

"Listen to the teachers. Listen to these professionals who are asking for books, school supplies, smaller classes, counselors and social workers, empathetic curriculum, and time," one educator tweeted. "They know what our kids need in schools, and it’s not teachers with guns."

Another teacher wrote on Twitter, "I don’t need to be armed with a gun but rather #ArmMeWith •legislature that puts our children’s lives before your guns •funding to truly support my students •more time to build a class community instead of inundating them with testing •action not just thoughts and prayers."

Yet another person chimed in with a most basic need that isn't being met, tweeting, "Please #ArmMeWith a working heater in my classroom."

As USA Today reported, Trump also insinuated that arming teachers would turn them into instant killing machines, capable of taking out someone armed with an assault rifle. "A teacher would've shot the hell out of him," Trump said, in reference to the Parkland shooter if there had been an armed teacher on site.

Here's the thing, though: There was at least one armed official present at Marjory Stoneman Douglas High School on that fateful day. The Los Angeles Times reported on Thursday that a sheriff's deputy waited outside as the mass shooting unfolded. So a "good guy with a gun" was right there during an active shooter situation — and even he refused to confront a person armed with a semi-automatic rifle. What's more, as the Florida Sun-Sentinel reported on Saturday, is there were potentially several armed sheriff's deputies on-site that did not enter the school on Feb. 14. So multiple, trained, weapon-wielding professionals were reluctant to engage someone with an AR-15-style gun. And politicians expect teachers to do so?

Clearly, guns in the hands of teachers — who could be faced with attempting to shoot at a current/former student armed with an assault rifle — is not the logical answer, here. How can schools possibly afford to give gun-carrying teachers a bonus, anyway, when teachers are literally buying school supplies for their classrooms out of their own pockets, according to NPR. Guys, so many of our schools can't even afford basic necessities.

So hell no, our teachers don't need guns. What our teachers need is legislators to ban assault rifles so they can focus on what they're actually trained to do: Educating and guiding the future generation. And they should be able to do so without the fear of sacrificing their lives to save our children from someone with a weapon designed to effectively create rapid, mass casualties. Enough is enough. The time for action is now.