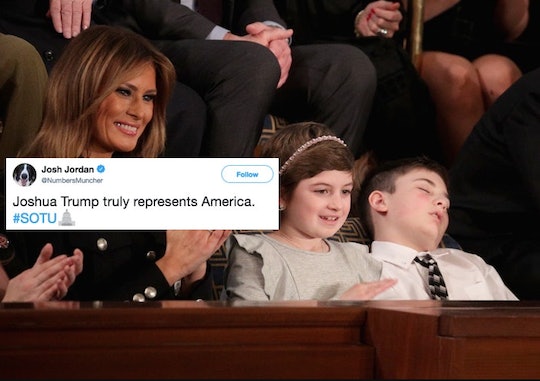 I think it's fair to say everyone reacts differently to the limelight. Some people thrive on it, love it. They need applause and attention so badly that maybe they become president so they can force people to cheer for them. Then there are those who are thrust into the spotlight and they're perhaps slightly less enthusiastic. Take Joshua Trump, for instance. He was the boy invited to the the 2019 SOTU as a guest of Melania Trump and fell asleep during President Donald Trump's speech. Because apparently not even the thrill of national attention was enough to keep him awake for that, and Twitter is sort of loving it.

Joshua Trump is an 11-year-old boy from Wilmington, Delaware who was invited to Trump's State of the Union address by the first lady, according to The Independent, ostensibly as part of her "Be Best" anti-bullying campaign. It seems Joshua has been bullied because of his last name, something Melania probably understands all too well. The bullying was bad enough, as his mom Megan Trump explained to HuffPost, that he officially changed his last name to Berto in December.

No kid should have to experience any bullying, let alone to that extent, and it's great that the first lady invited him to the State of the Union address as a comfort after all that turmoil.

Now if he could have just stayed awake, it would have been a really big moment.

In Joshua's defense, Trump's second State of the Union address was long. A full 82 minutes long, according to NBC News, the longest since the days of former President Bill Clinton who apparently must have really liked the sound of his own voice as well.

In my opinion, it might have ticked along a little faster without the constant (and unwarranted) standing ovations every few minutes. Then there was the bragging, the posturing, the promises... really, what was going on in that speech that could keep a kid awake?

As far as Twitter is concerned, Joshua's nap during the speech made him a Trump we could all really rally behind.

Joshua's impromptu and well-deserved nap was considered something of a hilarious coup for the people of America who struggled to sit through Trump's long-winded, and according to The Independent, frequently inaccurate, speech. I mean, Speaker of the House Nancy Pelosi must need to rest her eyes today after all the rolling they did last night. Especially when Trump tried to take a little jab at what he considered "ridiculous investigations."

While it must be exciting for Joshua Trump to fall asleep one minute and wake up a celebrity the next, I think he's in for an even bigger surprise.

If this kid gets bullied after getting invited to listen to the president's State of the Union speech and then full on falling asleep on national television, I'll be surprised. Hopefully all of this positive attention will help Joshua gain a little confidence at school.

Because he managed to take a nap while arguably one of the biggest bullies in the country prattled on. Pretty impressive.

More Like This
Reddit Is Not Impressed With Dad Who Hid Neighbor's Gnome Because It Scared His Kid
Here’s How To Fight For Abortion Rights
Taraji P. Henson Says “Guns Have More Rights Than A Woman” At The 2022 BET Awards
Obamas Issue Powerful Statements After Supreme Court Ends Roe v. Wade