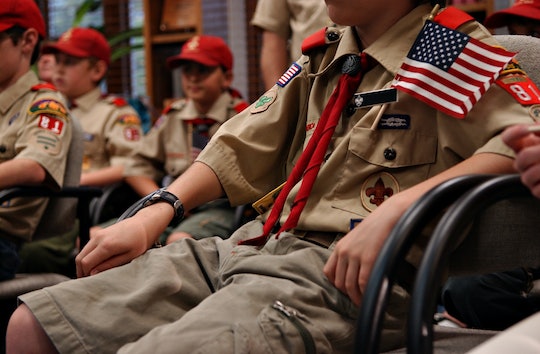 Don't Give The Boy Scouts Brownie Points Just Yet

The Boys Scouts of America announced on Tuesday that the 100-year-old organization would be allowing girls to join. It was reportedly a unanimous decision, one that will undoubtedly change the face of Boy Scouts, Eagle Scouts, and beyond for years to come. But, really, who cares if the Boy Scouts are admitting girls?

There is something rather obsequious and harmful about this decision, that you might not notice at first glance. Girls have had their own club for decades now and have not sought approval from the Boy Scouts, making this announcement that they're finally allowed into the quintessential "boys club" seem as though it's saying girls have finally truly arrived. On its face, the decision is great, but why now? Why not earlier? There's nothing that makes girls more worthy now than they were 10 years ago. And girls and boys have established enough of their own clubs that the decision seems sort of like a pat on the head that's come way too late. Even the Boy Scouts of America statement offered to support the decision to include girls had a certain ring of superiority to it.

The historic decision comes after years of receiving requests from families and girls. [T]he organization evaluated the results of numerous research efforts, gaining input from current members and leaders, as well as parents and girls who've never been involved in Scouting — to understand how to offer families an important additional choice in meeting the character development needs of all their children.

While the Boy Scouts aim to consolidate after-school programming for busy, working parents makes sense, what doesn't make sense to me is the idea that girls are still expected to consider being "allowed" in a boys club more important and more valued than creating something of their own. Let's get real here; the Girl Scouts of America have been more inclusive since the organization was created more than 100 years ago. And yet, the Boy Scouts appear to expect applause for doing something it should have done years ago.

Much ado has been made about the Boy Scouts decision to include girls within the organization at the beginning of 2018. Girls will be welcomed into the Cub Scout program, and a program to allow older girls the option to achieve the highest level of scouting, Eagle Scout, will be introduced in 2018 as well. The decision has been met with its share of supporters and detractors, according to CBS News, with the Girl Scouts of America criticizing the decision as being less altruistic and more financially-based. Girl Scouts of America President Kathy Hopinkah Hannan sent a letter to Boy Scouts of America President Randall Stephenson saying:

I formally request that your organization stay focused on serving the 90 percent of American boys not currently participating in Boy Scouts ... and not consider expanding to recruit girls.

The Boy Scouts have not returned Romper's request for comment regarding Hannan's statement.

And, it doesn't appear that there will be any co-ed dens. The Boy Scouts are divided into packs, which then establish dens. According to the Boy Scouts press release, packs can decide whether they want to establish dens for girls (with no boys):

Existing packs may choose to establish a new girl pack, establish a pack that consists of girl dens and boy dens or remain an all-boy pack. Cub Scout dens will be single-gender — all boys or all girls.

So, girls aren't even technically allowed in the same group as boys at all.

The Girl Scouts were founded in 1912 by Juliette Gordon Low in Savanna, Georgia. What started as a program to teach 18 girls about the outdoors and fellowship has since become a program that includes 1.8 million girls (although those numbers have been going down in recent years due to competing programs like youth sports). The two organizations have worked side by side for more than a century. The Boy Scouts of America promote the values of Scouting, according to chief scout executive Michael Surbaugh, like being "trustworthy, loyal, helpful, kind, brave, and reverent." The Girl Scouts of America motto is "Be prepared," and its slogan is "Do a good turn daily." Both groups encourage a spirit of adventure, encourage children to do good works in the community and learn resilience in outdoor environments.

But there is one integral element to the Girl Scouts that should not be ignored; a history of sisterhood that has always encouraged every girl to be a G.I.R.L. (go getter, innovator, risk-taker, leader).

The concept that girls should not only be grateful to be accepted into this particular boys club but also more than willing to drop their own club is dripping in entrenched patriarchal ideas. The move is contributing to the idea that men call the shots, and that women need to wait to be invited — wait for men to decide when or if they are somehow worthy.

And the acceptance of girl, while it might be nice, doesn't address both the Boys' and Girl Scout's huge underlying problem: that their names ostracize gender non-conforming kids. While both groups do accept transgender scouts, the language of the words "boy" and "girl" prove that each have a long way to go before truly including everyone.

On International Day of the Girl, perhaps the world can take a moment to accept that girls can have their own things. That being welcomed into a boys club is not better than communing with fellow girls — or fellow scouts of any gender. The Boy Scouts are in no way more worthwhile, more prestigious, or more desirable than the Girl Scouts or any other group that kids have created and built for themselves.

More Like This
Keep Talking To Your Kids About Abortion — It's More Important Than Ever
Obamas Issue Powerful Statements After Supreme Court Ends Roe v. Wade
This Map Illustrates Just How Many States Would Ban Abortion If Roe V. Wade Is Overturned
Viral TikTok Breaks Down How Beautifully Bluey Depicts One Character’s Infertility