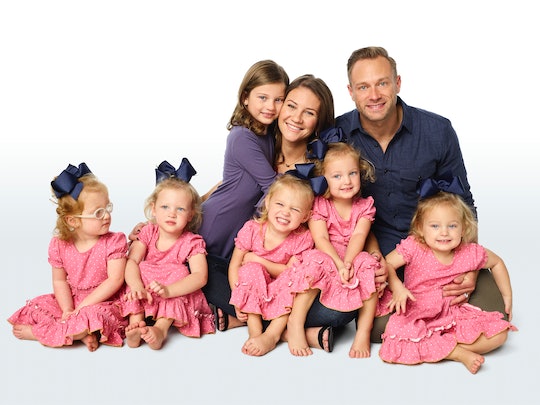 Hazel Is About To Become A Pro Golfer On 'OutDaughtered'

The sixth season of OutDaughtered opens with some major milestones: all of the Busby girls are getting older. Not only is eldest sister Blayke about to celebrate her eighth birthday, but the Busby quints turn 4 in "Fournado Warning." This exclusive clip gives you a glimpse at the start of birthday season, as well as the start of Season 6, which premieres on TLC on Oct. 1.

The clip begins with Adam Busby announcing that birthday season has commenced in the Busby house. Dealing with six birthdays in one week is a daunting challenge, but this family is especially equipped to handle it. Blayke and the quints (Olivia, Ava, Hazel, Parker, and Riley) celebrate their special days one right after the other: Blayke's birthday is Apr. 5, with the the younger girls following soon after on Apr. 8.

But it's not quite cake time yet. Instead, the entire family is heading out to play mini golf with Uncle Dale, Aunt Crystal, and their kids Kenzie and Bronson. Danielle's mom Michelle, AKA Mimi, arrives to help, too. When the girls find out where they're going, they let out a big cheer. And then Hazel deems herself the Easter Bunny, complete with ear-hands, because toddlers love to topic-jump during conversations.

The girls get themselves out of the car as fast as they can — faster, in fact, than Danielle is able to. They unlatch their own seatbelts, fling open the car doors, and unleash their small army upon the putt-putt course. Blayke is momentarily left behind in the car, enjoying a nap between the numerous car seats. That's what you call a "big mood."

"The girls have become a lot more competitive over the last few months," Adam notes in the confessional, which is perhaps why he's wary of giving each of them a long stick. They could do anything with those! But Danielle adds that they've been looking to give the quints more sporty activities to do as a way of channeling all that competitive energy. They could be tiny golf prodigies in the making.

Adam gives Hazel a quick tutorial on the finer points of golfing. He instructs her on where to place her hands and then tells her it's just like sweeping a broom. Hazel immediately swings at the ball, but perhaps takes the broom metaphor too literally as she gently sweeps it into the hole with more strokes than are technically necessary. Uncle Dale jokes that he's going to count each of them, but everyone cheers when Hazel sinks the ball.

"It's been very fast-paced this last year," Danielle says in the confessional. Adam remarks that they have a literal tornado in their house, but Danielle corrects him (and gives the episode its name): "We have five fournados." Those pint-sized forces of nature are about to embark on another year of learning and growing. But as hectic as it may be, with all this family support, it's bound to be as successful as Hazel's stellar mini-golf debut.

OutDaughtered airs Tuesdays on TLC at 8 p.m. ET on TLC.

More Like This
Netflix’s New Animated Kids’ Show Deepa & Anoop Stars A Color-Changing Baby Elephant
Take An Exclusive Sneak Peek At 'Bluey' Season 3 Before It Lands On Disney+
The Worst Fake Babies In The History Of Movies & TV
10 Cozy, Romantic, & Drama-Filled Shows To Watch If You Love 'Virgin River'