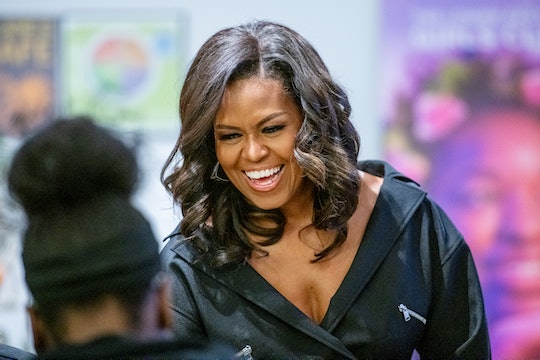 Friends and family members love to pick fun at my daughter's jam-packed bookshelf that holds books she won't be able to read for years. But I'm a firm believer that there is no greater gift you can give a child than a life of literacy. And the children's books Michelle Obama read to her daughters when they were young show that the former FLOTUS is firmly on my side in that debate. She raised Malia and Sasha to love reading as much as she does, and her recent interview on the books she chose for them makes it possible for you to stock your own little's library with the same titles.

Throughout the course of President Barack Obama's two terms in office, he and Michelle often took the time to read to children at schools, libraries, and events across the country. But that passion for kid lit was present in their home life, as well. The two shared their love for reading with their two daughters, Malia and Sasha. What books made the cut at home?

While appearing on the TODAY video “Open Book with Jenna Bush Hager,” Michelle said that the girls' reading list as children included popular titles like Goodnight Moon by Margaret Wise Brown or “any Dr. Seuss book.”

Along with these titles, Michelle also told Bush Hager that she also prioritized books with characters who "resembled her girls," like The Snowy Day by Ezra Jack Keats. This kind of representation in children's literature is an important tool in the fight against prejudice, as CNN reported, so Michelle's efforts were not in vain.

It's also likely that Michelle shared some of her other favorites with the girls, such as the picture books that she read at events during the Obama presidency. Those titles, according to HuffPost, included Alexander and the Terrible, Horrible, No Good, Very Bad Day, and Brown Bear, Brown Bear, What Do You See?

Mom wasn't the only one choosing the books for Malia and Sasha though. She told TODAY that President Obama also picked out what the girls read. His favorite children's book to read with them: Where the Wild Things Are by Maurice Sendak. Fans of the POTUS are likely unsurprised by his choice, as you may remember the Obamas reading them to crowds at the White House's Egg Roll event.

President Obama's love for reading is no secret. And during his speech, "Literacy and Education in a 21st-Century Economy," given to the American Library Association on June 25, 2005, he touched on the importance of sharing that love with children:

Reading is the gateway skill that makes all other learning possible, from complex word problems and the meaning of our history to scientific discovery and technological proficiency.

Along with sharing some books from Malia and Sasha's childhoods, Michelle also opened up to TODAY about her own love of reading as a child and the heroine who inspired her: Pippi Longstocking.

"I was really fascinated with this strong little girl that was the center of everything, and she was almost magical in a way," she said. "She was stronger and tougher than anyone. She had super-human strength, and I got a kick out of her."

I love the way the story weaves together so many complex and powerful forces that affect our lives and our relationships — family and parenting, religion and politics, and so much more. Plus, it’s just plain funny.

As Michelle Obama and her girls have shown, a connection between a parent and their child built over a mutual love for reading can last a lifetime. Whether it's Goodnight Moon or Grapes of Wrath, cuddle up and get reading.