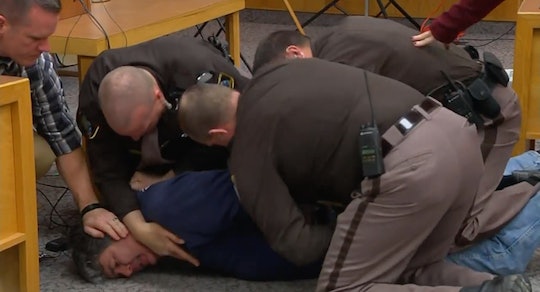 There is nothing about the trial of disgraced former sports doctor Larry Nassar that isn't absolutely gut-wrenching. In January, Nassar was sentenced to up to 175 years in prison, after more than 150 women and girls testified that he sexually abused them while they sought treatment from him for gymnastics injuries. On Friday, Nassar returned to court for another sentencing hearing, but after a judge denied a father's request to speak to Nassar directly, the dad of three of Larry Nassar's victims lunged at the "demon" coach in court, according to CNN, before being tackled and arrested by courtroom security.

Video from the footage is about as unsettling as it sounds: during the sentencing hearing, sisters Lauren and Madison Margraves spoke about being abused by Nassar, and afterward, their father, Randall Margraves, asked Judge Janice Cunningham if she would "grant [him] five minutes in a locked room with this demon." When Cunningham denied his request, he then asked, "would you give me one minute?" Cunningham responded by saying, "You know that I can't do that. That's not how our legal system works," before the distraught dad suddenly ran toward Nassar, only to be quickly detained. While being held down, Margraves yelled, "I want that son of a b*tch!"

The startling incident was a clear reflection of the pain felt by everyone touched by the Nassar case. Although Nassar has already been sentenced to so many years behind bars that he'll never walk free (in 2017, he was also sentenced to an additional 60 years for possession of child abuse images, according to The Guardian), it won't make up for the abuse his victims endured — or for the heartbreak and outrage felt by their parents and loved ones.

Yet after Margraves' attempted attack, Michigan Assistant Attorney General Angela Povilaitis admonished the father, according to CNN, and reminded the court room that, even given the circumstances, that kind of behavior wasn't acceptable. According to CNN, Povilaitis told the families gathered in the courtroom:

Margraves' response as he was escorted out of the courtroom? "You haven't lived through it, lady."

Margraves may not have agreed with Povilaitis' assessment, but she did at least have a point: in the video, Margraves' daughters can be seen standing beside him nervously while he spoke to the judge, with one of his daughters whispering "stop," as he continued to ask for time alone with Nassar. When he then made a run toward his daughters' abuser, she yelled out, "Dad!" before watching him be tackled by bailiffs. After being pulled up from the ground following his arrest, he asked the men, "What if this had happened to you guys?" while crying could be heard in the background.

On social media though, many users acknowledged the fact that his actions were understandable, even if they may have not been right. After all, the agony that Margraves and the other victims' families must have been feeling is hard to even imagine:

And some felt that granting Margraves a chance to get even with Nassar was only fair:

One Twitter user though had another (particularly brilliant) idea for supporting Margraves without condoning the violence:

At this point, more than 265 people have come forward to accuse Nassar of abuse, according to TIME, with Friday's court appearance focusing on molestation charges against Nassar by athletes at a Michigan gymnastics club, which Margraves' daughters belonged to. Survivors who have spoken out against Nassar during the hearings have spoken of his "manipulation" and the way he took advantage of families' trust to ensure he was able to continue abusing the gymnasts. Former gymnast Annie Labrie said she ultimately hid abuse from her parents, according to The Merced Sun-Star, in part because she believes gymnasts "were conditioned for years to obey at all costs." In her own statement, former gymnast Katherine Ebert called Nassar "the most vile, disgusting creature [she has] ever met," and said, "There are black holes in my memory that come back as nightmares or flashbacks, not wanting to believe they're true."

Regardless of your take on Margraves' actions, it seems like his anger and heartbreak are things that virtually all parents can empathize with. When you raise children and try as best you can to keep them safe, having to realize that such horrific acts were being committed against them by someone you believed you could trust would be devastating — especially when it also meant you'd later stand by and watch while they recounted their trauma in a courtroom, with their abuser in the same room.

The video of Margraves lunging towards Nassar during Friday's hearing isn't an easy one to watch, and it's certainly not something that every parent in his position would have actually done. But it's not at all hard to understand why he did it, or why even Nassar's life-long jail sentence would still not feel like justice was served.