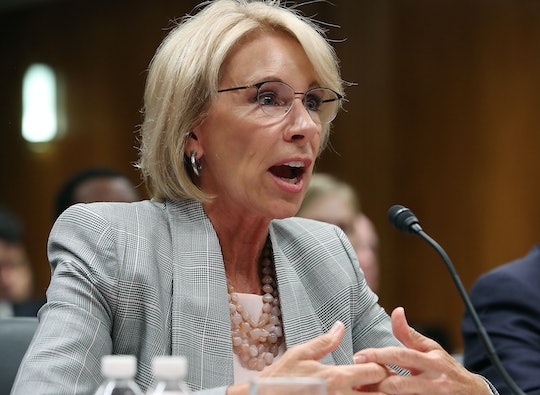 Secretary of Education Betsy DeVos has a known appreciation for charter schools. But now it seems as though she's willing to a gut an extremely beneficial program — the Special Olympics — in order to fund them. Understandably, the athletes that participate each year, as well as those that are planning to in the future, are upset. But they have a ton of people on their side. The family members of those athletes and other supporters can't believe such a suggestion would ever be made. That's right. The Department of Education proposed eliminating Special Olympics funding.

EARLIER: Speaking in front of Congress on Tuesday, March 26, DeVos defended a proposed $17.6 million dollar funding cut to the Special Olympics, according to the Detroit Free Press. The money would then be reallocated to other educational areas. And given that the administration's budget proposal includes adding $60 million to charter schools, it's not far-fetched to think that some of that Special Olympics money could end up there. Romper reached out to Special Olympics for comment and is awaiting a response.

The cut would be part of the Trump administration's spending plan for the 2020 fiscal year.

DeVos has long supported school vouchers and charter schools as alternatives to public schools, saying that parents have the right to choose where their kids go to school, according to Business Insider.

Opponents say that encouraging parents to enroll their children in charter schools would take away desperately-needed tax dollars from already-suffering public schools all across the country, Business Insider noted.

When questioned by members of Congress, DeVos didn't seem to know how many kids would be affected by this cut. But Representative Mark Pocan (D) didn't let it slip, and made sure DeVos was aware of the 272,000 children who would see their funding taken away.

"We had to make some difficult decisions with this budget," DeVos said, per Sports Illustrated.

So, if the government isn't going to pay for the Special Olympics, then who will?

DeVos suggested that the Special Olympics would be better funded through philanthropy instead, according to Vice.

"The Special Olympics raises more than $100 million philanthropically every year, and while the Secretary is very personally supportive of their mission and work, the activities of Special Olympics are better supported with other state, local and private funds," DOE Press Secretary Liz Hill tells Romper by email.

Last year, DeVos planned to donate part of her salary to the Special Olympics, as Politico reported.

"We are not doing our children any favors when we borrow from their future in order to invest in systems and policies that are not yielding better results," DeVos said during her prepared remarks to members of a House subcommittee, according to the Detroit Free Press.

But the Special Olympics does a lot of good each year, by supporting children with developmental and physical disabilities since its first games in 1968, according to Vice.

To give you an idea of the scope, last year's Special Olympics USA, held in Seattle, featured more than 4,000 participants who competed in 14 different sports, according to Vice News.

There's also a Special Olympics International, which concluded last week in Abu Dhabi, according to the organization's website.

There's still hope, though. Congress ultimately controls spending, so this number may not stick. After all, this is just a proposed number. Here's hoping that all the swimmers, runners, bikers, and jumpers in the Special Olympics continue to get the support they need not only from their families, but from Congress as well.

Editor's Note: This article has been updated to include DOE Press Secretary Liz Hill's comment.

More Like This
Taraji P. Henson Says “Guns Have More Rights Than A Woman” At The 2022 BET Awards
Here’s How To Fight For Abortion Rights
Obamas Issue Powerful Statements After Supreme Court Ends Roe v. Wade
Keep Talking To Your Kids About Abortion — It's More Important Than Ever