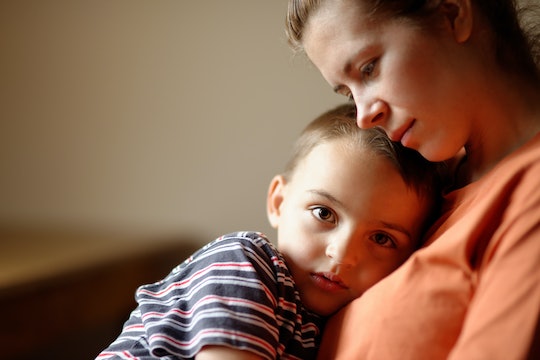 Study: Effects From Severe Childhood Trauma Can Be Felt For Generations

Researchers have well-documented how trauma in childhood can affect your physical and mental health as an adult. People who've had adverse childhood experiences — or ACEs — are more likely to have depression or cope with heart disease and other conditions. But few studies chronicle the long-term impacts of a parent's trauma on their family, and, more specifically, their children. Now, there's an answer: The effects of severe childhood trauma can be felt for generations, according to new research.

A new study published Monday in Pediatrics found a link between a parent's childhood trauma and higher rates of behavioral issues in their kids, according to CBS Local. In particular, researchers at the University of California at Los Angeles discovered that parents who reported having for or more ACEs — divorce, sexual abuse, witnessing violence, and exposure to substance use, among them — are more likely to have children who are diagnosed with mental health or behavioral problems, CBS Local reported.

To reach these results, the researchers examined data from the 2014 Children Development Supplement and 2014 Childhood Retrospective Circumstances Study. Their analysis also showed that children with parents who experienced traumatic events are two times more likely to develop attention deficit hyperactivity disorder (ADHD), and four times more likely to cope with mental illness, according to the study's findings.

Early-life experiences — stressful or traumatic ones in particular — have intergenerational consequences for child behavior and mental health. This demonstrates one way in which all of us carry our histories with us, which our study shows has implications for our parenting and our children's health.

But intergenerational effect of childhood trauma is not even among parents. Turns out, the adverse childhood events experienced by mothers have a more significant negative impact on children's outcomes than those experienced by fathers, ABC News reported. Schickedanz theorized that this disproportionate effect may exist because mothers are more often the primary caregivers in the homes.

The Pediatrics study is the first large-scale study to show the intergenerational effects of toxic stress and severe trauma as it relates to parents and their children. But the researchers at UCLA said their next step is to study how adverse childhood events experienced by grandparents may affect their grandchildren, according to ABC News.

Right now, we are exploring whether these intergenerational [adverse event] associations persist across more than one generation.

The Pediatrics study released Monday is not the first to look at the generational effects of toxic stress. Another study, published in the same journal in March, came to a similar conclusion: Children of parents who experienced ACEs faced an increased risk for developmental delays.

Researchers from the Cincinnati Children's Hospital Medical Centers followed babies from 2 months old through 2 years old and analyzed the ACE exposures of more than 530 mothers and fathers, according to Reuters. What they found is that, for each additional ACE mothers endured, children were 18 percent more likely to have suspected delays, while for fathers, the jumped to 34 percent, Reuters reported, showing a reverse trend from the UCLA study.

What’s more: Children whose mothers experienced at least three ACEs were significantly more likely to have several developmental issues, according to the study's findings.

It's not surprising that trauma would have such an intergenerational impact. But it's helpful to have the research to see how, exactly childhood trauma and stress can reverberate throughout a family. With this information, doctors can better understand and address trauma in their patients, whether they're caring for parents or children.