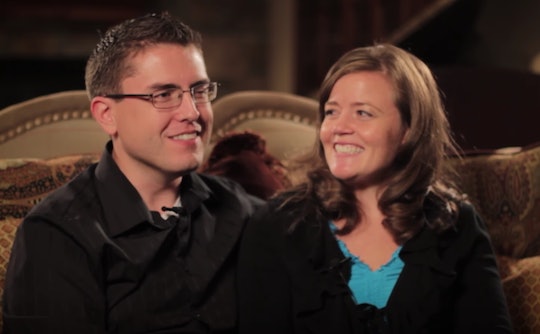 Just over five years ago, Mormon blogger Josh Weed shared a coming-out story in which he revealed that he and his wife, Lolly, had married despite both being aware that he is gay. It was a viral story that took the world by surprise — and angered many in the LGBTQ community for myriad reasons. For years, Weed defended his choice, but in a personal post on Thursday, he issued an apology — alongside the news that Weed and his wife are getting divorced — and it's a must-read.

Weed, who originally shared his story in 2012, came out to Lolly when the two of them were in their teens — just a few years before they decided to get married. They went on to have several children, and it wasn't until their 10-year wedding anniversary that Weed and Lolly shared the circumstances behind their decidedly unique marriage.

Despite making it clear even in 2012 that he didn't necessarily endorse his lifestyle for everyone, many were upset by his revelation. After all, as a therapist, Weed worked with people struggling to come to terms with their own sexual orientation — and it seemed disingenuous to many to counsel self-acceptance while simultaneously living out of line with one's own sexuality.

While that 2012 post was technically one about an individual choice Weed made, it was — deep down — a choice that came from internalized homophobia, and it was one used by many to bully other queer people or even by queer people to chastise themselves, he wrote in his post:

This is what the church’s current stance does to LGBTQIA people. It actually kills them. It fills them with self-loathing and internalized homophobia, and then provides little to no help when the psychosomatic symptoms set in, instead reacting to this unexpected by-product (after all, living the gospel isn’t supposed to bring misery and death! It’s supposed to bring immeasurable joy! Right?) with aphorisms like “have more faith,” or “have an eternal perspective” or “be grateful.” And the LGBTQIA person is left even further alone, now having been shamed by having it implied that their unhappiness and lack of health is their own fault because they aren’t being righteous enough, or trying hard enough. And so, they try harder. And they get sicker. And the cycle continues. It is a sick, pathological spiral. Worst of all, and what amounts to the very crux of the problem: the church also deprives them—us—of attachment, and a natural, verified, studied reaction to attachment blockade is suicidality.

So Weed issued an apology — for the internalized homophobia and for the way his public declaration may have affected others. "We’re sorry for some of the things we said in our original coming out post in 2012," Weed wrote. "There are several ideas in that post that, though well-meaning, we now realize stemmed from internalized homophobia. We’re sorry, so incredibly sorry, for the ways our post has been used to bully others."

We’re sorry to any gay Mormon who even had a moment’s pause as they tried to make the breathtakingly difficult decision that I am now making—to love myself fully for exactly what God made me—because of our post. We’re sorry for any degree that our existence, and the publicity of our supposedly successful marriage made you feel “less than” as you made your own terribly difficult choices. And we’re sorry if our story made it easier for people in your life to reject you and your difficult path as being wrong. If this is you, we want you to know: you were right. You did the correct, brave thing.

It was a heartfelt apology, and one that resonated with many:

In the post, Weed reflected on his own feelings in recent years, as well as what he'd learned about the LGBTQ community, both from research and first-hand experience. And what it comes down to? Trying to repress one's sexual or gender orientation is psychologically harmful — and living out of alignment with who you are can cause very real depression and anxiety.

"Probably the most motivating factor of all that got me to actually really consider what God had been telling us for a while was my recognition of my own internalized homophobia—the layers of disgust and self-loathing I felt for myself that I was in denial of—and the way that lead to my own suicidal ideation," Weed wrote.

It may have taken them 15 years of marriage to get there, but Weed and Lolly are now ready to move forward with relationships that allow them to connect romantically and feel fulfilled — and Weed is encouraging everyone else to do the same. His letter was honest, touching, and apologetic, and it's well worth a thorough read. Here's wishing Weed, Lolly, and their family the very best as they move forward.