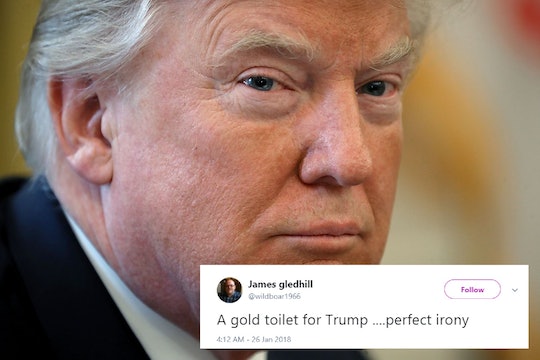 The Guggenheim Offered Trump A Gold Toilet, & Twitter Is Having A Field Day

If trolling is an art form, museum curator Nancy Spector has indisputably created a masterpiece. In an email recently obtained by the Washington Post, Spector politely declined the White Houses's request to borrow a Van Gogh painting from the Guggenheim, and offered Trump a gold toilet in its place. The museum has confirmed the email's authenticity, which was addressed to Donna Hayashi Smith of the White House's Office of the Curator. In it, Spector stated that the museum staff is pleased to learn that the president and first lady are interested in "demonstrating their support for the arts," but they're unable to lend them van Gogh's "Landscape With Snow" for display in their private quarters.

"Fortuitously, a marvelous work by the celebrated contemporary Italian artist Maurizio Cattelan" had just become available, Spector wrote, and "he would like to offer it to the White House for a long-term loan." The piece, an 18-karat gold fully functioning toilet titled "America" (gently used), "beautifully channels the history of 20th-century avant-garde," Spector boasted, adding, "It is, of course, extremely valuable and somewhat fragile, but we would provide all the instructions for its installation and care." The White House apparently rejected this generous offer, but did not offer a comment on the decision.

Let us count the ways in which Spector's offer was absolute perfection: first of all, have you seen the inside of Trump's New York penthouse, or his part-time White House in Florida? Honestly, dude probably already has a gold toilet (or 10).

And the juxtaposition of elegance with crassness is spot-on, too, echoing the great Plastic Spoons in the Caviar debacle, his penchant for well-done steaks with ketchup, and, of course, his very existence. Trump is a golden toilet, personified.

Then, of course, we have his recent racist and inflammatory comments about Haiti, El Salvador, and literally all of Africa. What better way to stick it to someone who called such places "sh*tholes" than to gift him with a literal one?

Also, let's not forget the title of the piece, which the artist coyly refuses to explain. Although it was first conceived before Trump's election, it's certainly emblematic of his effect on the country, which Spector once categorized as "a term marked by scandal and defined by the deliberate rollback of countless civil liberties, in addition to climate-change denial that puts our planet in peril."

In another twist, it could be that the Guggenheim just doesn't trust Trump to appreciate art, since, according to Public Radio International, he allegedly owns a counterfeit Renoir that he insists is real, despite the fact that the real one is hanging in a Chicago museum.

And one more metaphor, though it's a little low-brow. According to this exhaustive interactive graph by the Washington Post, Trump made more than 2,000 "false or misleading claims" during his first year in office. And those are just the things that can be easily proven wrong, of course. He's the very definition of "full of it."

Finally, although it's not particularly kind to poke fun at a person's phobias, Trump's relationship with germs is just too odd not to discuss. He eats fast food almost exclusively because he thinks it's safer than the alternative. And if he's worried about catching germs from another person, his history certainly doesn't show it. So giving him a toilet that was used by more than 100,000 patrons of one of the Guggenheim's gender-neutral restrooms seems like an extra-spicy dig.

I have never appreciated art on such a deep and profound level, and I don't think I ever will again. Thank you, Nancy Spector. You're a true American treasure.