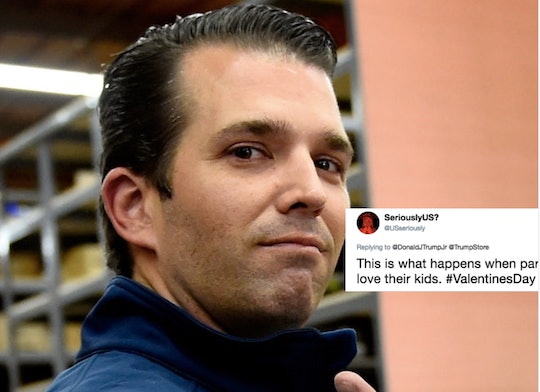 Don Jr.'s Valentine's Day Gift Idea Is Getting Roasted On Twitter, Because It's That Bad

Who knew Donald Trump Jr. was such a sucker for old romantic tropes like celebrating Valentine's Day? Admittedly, it shouldn't really surprise anyone. Valentine's Day, after all, is considered by those of us who are slightly jaded to be a commercial holiday. Something to encourage consumers to buy presents to prove their love; so in that regard, perhaps it's right up the oldest Trump son's alley. Unfortunately, the internet wasn't really *ready* to embrace him as a symbol of romantic love. The internet dragged Trump Jr. for his Valentine's Day tweet, and now I'm worried his sweet little heart might be broken.

Trump Jr. has taken to Twitter since his father Donald Trump became the 45th president with nearly the same vigor as the president himself. Whether he's calling out members of the media for creating "fake news" or peddling some of his family's wares, he has taken to Twitter like the proverbial duck to water. On Wednesday, Trump Jr. shared a picture of a bear in a bathrobe straddling a toy airplane emblazoned with the Trump name with the caption: "When roses just won't cut it... #ValentinesDay @TrumpStore TrumpStore.com"

So now you know if your partner gives you some version of a teddy bear wearing a bathrobe on an airplane, they got the idea from Trump Jr. And you might now have some questions about the person you love.

I can tell you some people who won't necessarily be taking Trump Jr.'s cue as to what to provide for Valentine's Day: the spirited folks of Twitter. They weren't exactly in love with his gift idea. Also a side note to the man in question: roses will pretty much always be a better idea than a teddy bear in a Trump robe on a Trump plane.

Shocked To Their Core

There were a few tweeters who had other suggestions for Trump Jr. for Valentine's Day.

A few clever tweeters even had something of a clairvoyant moment about what could possibly happen if you gave your partner a bear straddling a plane for Valentine's Day (perhaps especially because the idea came from Trump Jr. specifically):

One wonders if Trump Jr. is going to be giving such a questionable gift to his wife Vanessa Trump for Valentine's Day. One also assumes that, if he does, she will be hugely disappointed.

It's possible that Trump Jr. is hoping to blow off a little steam on Twitter to take his mind off that whole pesky Russia scandal. After insisting for months that he hadn't met with Russians during the 2016 presidential campaign, as The Hill reported, it turns out that Trump Jr. did, indeed, reportedly meet with a Russian lawyer. As did his brother-in-law, White House adviser Jared Kushner, The Hill reported. Trump Jr. continues to say that he met with the Russian lawyer simply to discuss Russian adoption policies, the Los Angeles Times reported

But I think he was hoping to sell him on buying a bunch of teddy bears in Trump robes. Don't hold me to it, it's just a theory. An incorrect theory, surely, but a theory nonetheless.

Maybe the Trump Corporation Executive Vice President found himself with a whopping load of teddy bears to unload, and decided to try his hand at styling said teddy bears to make them more appealing to the general public. Maybe he spent hours hunched over his laptop looking at cute teddy bear pictures on Pinterest, and then realized Valentine's Day was just around the corner... in other words, it was a perfect storm for Trump Jr.

And it also gave his critics something to roast him for. Which is probably all they really wanted for Valentine's Day anyways. Who needs roses and chocolate and delicious dinners and spa getaways when you can have a marvelously ill-conceived tweet from Donald Trump Jr.?

All we need now is a weird tweet from his father and we'll be right as rain.