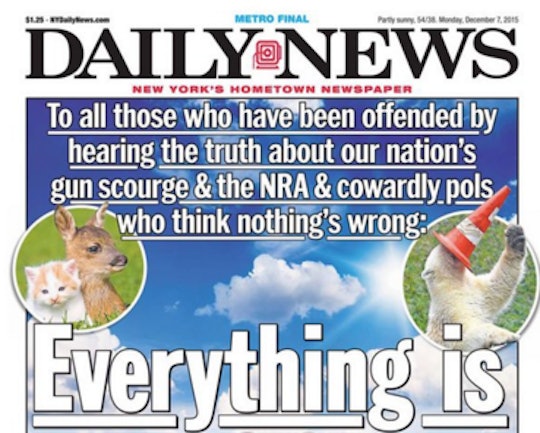 It may be the understatement of the century to say recent gun violence has a few media outlets talking about the state of American gun control. But one publication is going even deeper than that — and I, for one, am thrilled that they are making such a bold statement. Doubling down, today’s New York Daily News' controversial “Everything is Awesome!” cover is a clear jab at critics of the paper's equally provocative“God Isn’t Fixing This” cover last week. And boy, are they making one helluva statement. Although this conversation may make some people uncomfortable — and even offend — it’s the right move because it means we are finally having an ongoing national conversation about the gun violence epidemic.

If you’ve been keeping your eye on The Daily News, it is clear that they are the main outlet spearheading this charged campaign. While the puppies and cats covering today’s issue is daring on its own, they have ruffled quite a few feathers in the days following the San Bernardino shooting, which claimed 14 lives. Thursday’s “God Isn’t Fixing This” cover prompted lots of debate about whether it was the right approach to take. A ton of publications responded that mocking prayer wouldn't help gun violence, either.

But, the Daily News wasn't finished yet. The next day, the paper ran an editorial claiming that National Rifle Association EVP Wayne LaPierre is a terrorist, just as the San Bernardino, Planned Parenthood and Charleston Church shooters were. Whether or not you believe that, the piece highlight the NRA's role in the persistent availability of guns, and the cover made a powerful point about how society and the media should perceive terrorists for now on: Not just as Muslim, immigrants, or otherwise brown.

Fortunately, the media looks like they aren't going to let the gun control debate fade out like it normally does. Here are four more publications who are openly and honestly talking about gun violence and control (and encouraging their readers to do the same):

Though they are based across the world, The Australian took on American gun control laws. Since many believe that Australia got it right when it came to reacting to mass gun violence, it should come as no shock that the national paper urged the U.S to take action on lax legislation and close loopholes. They also struck back against David Ean Leyonhjelm, a South Wales Senator seen in an NRA video saying that Australia is weakened due to their tight gun laws. "Paris showed the consequences when Islamist terrorists have access to lethal weaponry. The US’s vulnerability has been exposed. For legislators to fail to act on gun control now would be to play into the hands of the terrorists," they wrote.

Like The Daily News, The New Yorker has never shied away from using their cover to make a statement. The recent spate of incidents of mass violence was no exception. For their Dec. 14 issue, The New Yorker depicted a couple shopping for military-grade weapons while picking up groceries. Online, they directed readers curious about the cover to read John Cassidy’s piece which pointed out there is more than three hundred million guns circulating in the U.S. Cassidy also highlighted a gun culture and bloodlust that has sparked the ever-troubling militarization of police — something that shows no sign of slowing down. He explained, “Seeing cops in two states under fire from heavily armed shooters, many police chiefs around the country will conclude that they, too, need more firepower. And given the deadly arsenals that alienated private citizens, whatever their precise motivations, can readily assemble, it will be hard to counter this argument." Cassidy continued:

In the United States, sadly, the political system is paralyzed, and in many parts of the country social norms are skewed in favor of gun ownership. Far from regarding strict regulation as a potential solution to a serious problem, many gun owners regard it as a potential threat to their own liberty and safety. [...] In this context, the question of whether [Syed] Farook, [Tashfeen] Malik, and [Robert Lewis] Dear are to be categorized as terrorists is a secondary issue. America is stuck in a self-reinforcing cycle of gun violence, and things might be about to get worse.

With so many publications issuing a much-needed call to action, The Detroit Free Press' take is noteworthy because it was a more emotionally-charged appeal that far too many parents understood. Entitled “Gun Control Inaction Makes Mass Shootings a Way of Life,” Free Press columnist Nancy Kaffer talked about how she is heartbroken about how the terrible conversation about mass shootings has to be had with her young son far too often. Kaffer wrote:

I can't imagine what he makes of this mess of contradictory instructions. These are horrible conversations to have with your 5-year-old child. But I am not so naive as to think they are not necessary. This is how we live, now: For a parent, or a school, to fail to prepare for mass murder would be irresponsible. Tell me this is an acceptable way to live.

For the first time since 1920, The New York Times dedicated their cover to an editorial — about gun control laws — and it could not have been for a better reason. The title, “End The Gun Epidemic in America,” was powerful in its own right, but the Dec. 4 editorial began with a blunt, succinct comment that needed to be said:

It is a moral outrage and national disgrace that civilians can legally purchase weapons with brutal speed and efficiency.

While The Times admitted that gun control opponents are correct that no law is 100 percent perfect and there are potential constitutional obstacles, they asserted that it is unacceptable that nothing is being done to control the epidemic. “It is possible to define those weapons [combat rifles] in a clear and effective way and yes, it would require Americans who own those kinds of weapons to give them up for the good of their fellow citizens,” The Times' Editorial Board wrote.

Let's just hope beyond all the rhetoric and talking points that some sort of concrete, worthwhile change comes from this whole debate. It is about time.

More Like This
Ginger Zee Had A Perfect Response After A Troll Asked Her "Who's Raising Your Kids?"
Yellowstone Season 5 Officially Has A Premiere Date
Meghan Markle Calls On Men "To Be Vocal" In The Aftermath Of Roe v. Wade Ending
Elmo Talks About Getting His Covid Vaccine In A Cute New Video